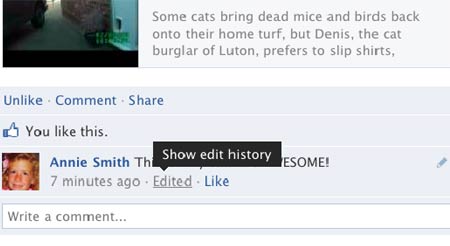 The ability to edit comments on Facebook is no longer a dream as the Menlo Park-based social network has now started to roll out this particular feature. This should not only allow users to tidy up their comments, but also avoid unnecessary notifications that arise when re-posting.

The procedure to modify a Facebook comment is pretty much straightforward. All users have to do is hover over the comment, head to the Pencil icon on the right where the Delete and Hide options are normally located, click on Edit, and finally make the desired changes to the post. Once that’s done, pressing Enter will update the comment with the altered content. The process can be cancelled at anytime by simply hitting on the Esc key before saving the changes. For every comment that users modify, a note is said to show up under the post displaying the time it was altered.

All those who can view the comment will be able to access this detail along with an Edited link which stores all changes made to the post over time. According to the guys over at The Next Web, Facebook users have reported that the feature in question seems to have a time limit of 30 seconds for carrying out modifications. Moreover, comments can be altered any number of times. So unlike previously where it had to be deleted and re-posted, resulting in unnecessary notifications to all those who replied to the post, this newfound ability is most likely to be one of the best additions till date on the SNS.

Like we’ve stated before, the ability to edit Facebook comments is currently rolling out and it should be available to everyone in the next couple of days.