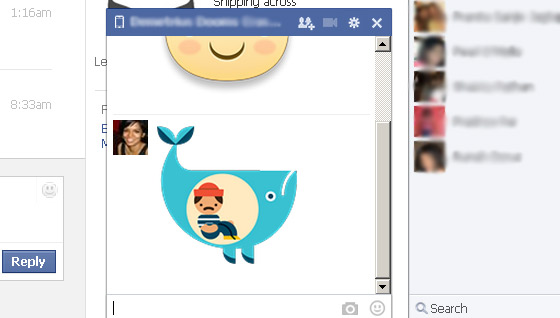 Facebook stickers have come to the web too. So now there’s a lazier way of saying ‘I’m trapped inside a whale’ than typing out the whole sentence. This was a feature that was introduced to Android back in April and then to iOS only two months ago. For those who haven’t had a chance to use it yet, stickers are emoticons and similar graphics which can be sent to a pal over chat or messages.

There are over a dozen Facebook sticker packs to choose from, with each set containing some really elaborate ways of the expressing an emotion without actually putting it into words. The Meep and Pusheen bundles appear by default besides the regular emoticons. These can be accessed by clicking on the smiley in the lower right side of the chat window. The Sticker Store is represented by a shopping basket and hitting this will lead users to the plunder.

Our pick of the 5 most interesting Facebook sticker wads are First Mate, Prickly Pear as well as Banana by Jayde Cardinalli, Despicable Me 2 and Jared Nickerson’s Skullington. All of the bundles can be added to the chat options and used for free. But we can picture Facebook looking to generate revenues with ad stickers in the future. We mean, we just looked up Google for the Despicable Me 2 release date after seeing the set themed around the movie in the virtual store. And now we want to watch the movie. 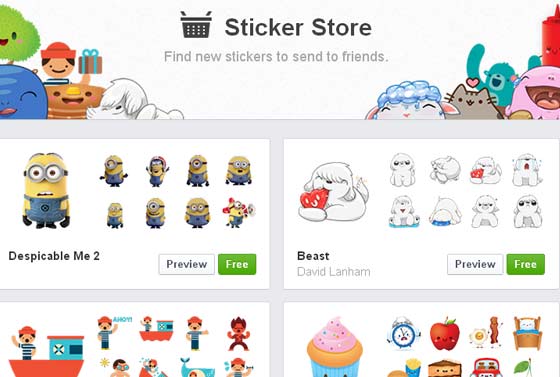 Product placement within a networking service we use on a daily basis can hardly be a bad idea for companies keen on finding ways to advertise themselves unobtrusively. That’s like flipping the idea of bringing social context to ads in a manner of sorts. This latest move by the SNS giant should also add some personality to its chat tool in the face of more popular apps like Kik or WhatsApp. Recognize David Lanham’s pack called Beast? That’s right, Mark Zuckerberg’s pet dog, Beast, has got Facebook stickers dedicated to him too.

Now if only we could upload our very own customized photo stickers to the social network and use them in chat.