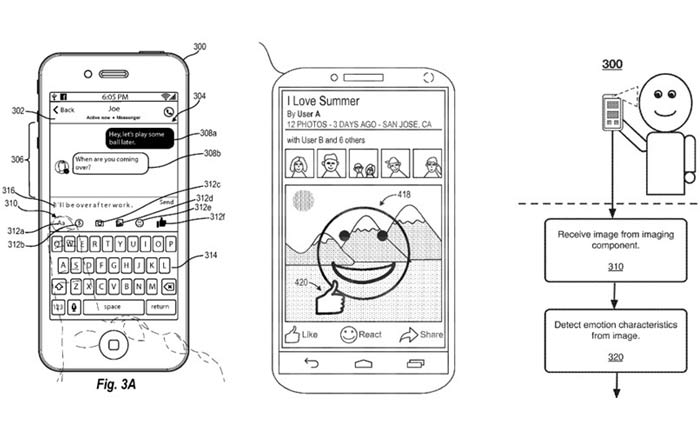 Facebook might be thinking of spying on you through your handset’s camera or laptop’s webcam if it follows through on a patent it filed for in 2014. The copyright got published in 2015 but was spotted recently by CB Insights alongside 2 other potentially invasive patents.

Titled ‘Techniques for emotion detection and content delivery,’ the document describes how Facebook could secretly track your facial expressions when browsing through the site even when not using the camera. The idea is to analyze how you react to certain types of content and then utilize that information to present relevant media.

For instance, Facebook could observe that you smiled at a picture of a friend and then show you more photos of that particular friend in your News Feed. If you looked away from a cat video, the company would stop showing you similar videos. The spying can be extended to ads as well. If you watch a scotch ad, the site may then show you more scotch ads.

Also Read: Facebook’s working on tech that lets you type with your brain, hear with your skin

Facebook CEO Mark Zuckerberg notably ran into some controversy last year when a photo he posted of himself revealed that he covered the microphone and webcam on his laptop with tape. The brand for its part told The Independent that it often seeks patents for technology it never implements and they should not be taken as an indication of future plans.

The other 2 Facebook patents which have come to light were published in May 2017 and also dive into some creepy territory. One discusses ways to observe things like your typing speed, location, and movement to predict your emotion and adapt messages to reflect that, changing the formatting of the text to better convey your mood via font, size and spacing.

The other patent automatically generates emojis after determining the emotion being displayed by a face in a photo. For example, Facebook could suggest a smiling emoji in reaction to an image of a friend smiling or a thumbs up emoji in response to a thumbs up gesture.

There’s no way to know for sure whether Facebook will eventually implement any of these methods. In any case, the company is definitely thinking along the lines of finding out what you’re responding to and keeping you hooked on the site by presenting you with more of the same.