The Facebook Share button, according to us, is one of the basic features the social network has left out from its mobile-optimized application. Well, the company has now decided to throw in it anyway, allowing users to like, comment and spread the word with others.

Apart from allowing members to re-post stuff that was initially shared by others, the update brings in platform specific changes. For Android, users will be able to create a new album straight from the Photos tab through the Timeline. Improvements have been carried out to image tagging, while the status update failure faced by some members, is now fixed. Where iOS is concerned, friends can be tagged in almost any post or photo and the company has thrown in smileys, hearts and other emoji for messages. Users will also be able to sort their news feed by simply tapping the button in the left sidebar. 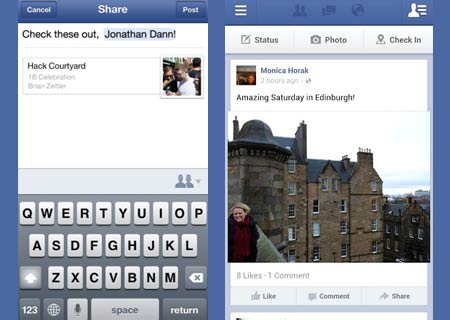 Over the past few months, the Melno Park based giant has been busy rolling out new features and improving existing ones. Back in May, the company introduced the App Center which is a social hub for acquiring free and paid applications. The feature was launched for mobile the following month. On acquiring the popular image sharing app Instagram, the giant also launched Facebook Camera for iOS allowing users to capture and edit photos as well as conveniently publish them to their profiles. An update for Apple’s mobile platform was released in August packing in various speed improvements and other enhancements.

For the main website, the SNS introduced the ability to edit comments and earlier last month, almost anyone with an account in the US could promote a post for a cost. In recent news, reports have been making their rounds that the company is testing a reply button and notification sound. The former feature allows users to respond to a specific person or post, while the audio alert being implemented is said to make a ‘ping’ noise. 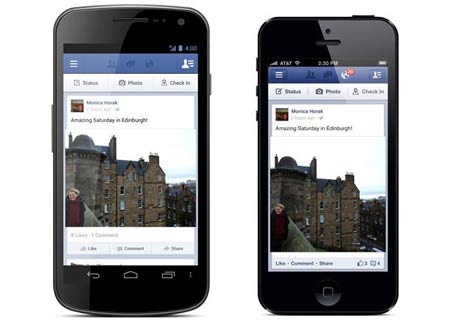 The Facebook Share button has been incorporated within the latest update for the Android and iOS applications and it can even be accessed through the mobile-optimized website as well. The apps are available for download through Google Play and the Apple App Store.