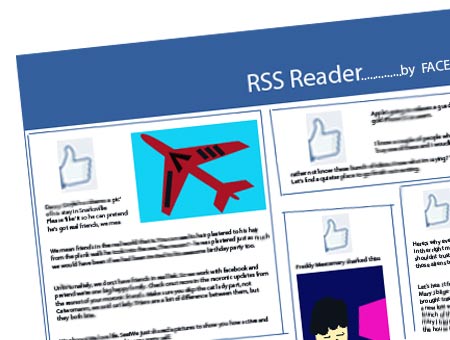 Now that Google Reader is moving out, the folks at Menlo Park are building plans to launch a Facebook RSS reader. The news is based on unconfirmed word and the only thing supporting it is a bit of code that was spotted by an eagle-eyed developer.

When Google announced that it would be pulling the plug on its news aggregation tool, a lot of companies offering alternatives were seem scrambling to make their presence felt. For anyone who remembers the scale of panic that ensued owing to Mountain View’s decision, competitors going out of their way to shove their creations in everyone’s faces made perfect sense. By now, anyone who hasn’t already started using Pulse, Feedly, Netvibes or the likes, probably didn’t need it anyway.

That doesn’t make the idea of a Facebook RSS reader sound farfetched though. Pointing to Tom Waddington’s Cut Out + Keep blog as the source of the story, Mashable notes that an interesting bit of code going by ‘rssfeeds’ appeared in the social network’s Graph API. We do know that the SNS already lets members access their account notifications about things like new posts, photo tags and more. This can be done by adding the RSS link to a user’s reader tool.

But we’re apparently not talking about the same thing here. Waddington implies that it is a Facebook RSS reader we’re looking at. When we have a social network this big taking an interest in the RSS reader business, something exciting must surely come out of it. Wouldn’t it be really cool (and messy) to have a steady stream of news and updates from friends on the same page? But maybe it’s too much of a change to expect. The SNS has a bad enough time convincing most users that design alterations are for the best every time there’s an update.

If the release of the Facebook RSS reader is timed just right, we’ll be seeing its launch before July 1.