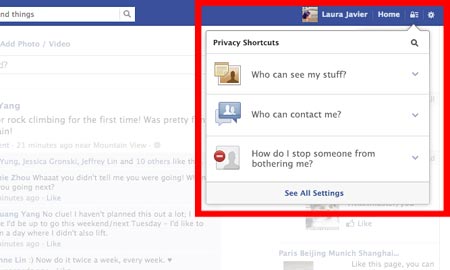 Facebook has now officially spoken about its new privacy shortcuts, even though many will have already noticed the slight change on their page. In addition, the company is pushing out a simpler activity log as well as a revamped request and removal tool to help users manage the photos in which they’re tagged.

The good thing about the privacy shortcuts is that users will be able to change their settings without having to navigate away from what they’re doing. The gear icon on the top leads to a drop-down menu that explains it all easily enough. Users can change the visibility of future posts and set their filtering right from the drop-down. 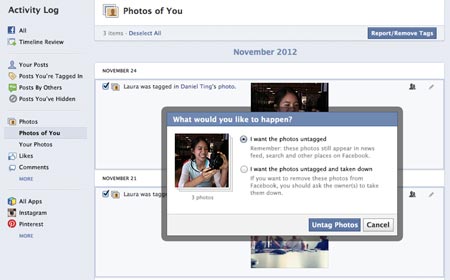 In addition, the activity log has been updated and it is now easier for users to see what they’ve engaged in across the site. From here, changes to who can see a specific post can be made, and what appears on the timeline can be controlled. Also within this refreshed log is a way to review the photos in which users have been tagged.

And that brings us to the next feature to which Facebook has made sweeping changes. This is the request and removal tool to help manage the multitude of photos in which users have been tagged. In the activity log, under the ‘Photos of You’ tab users will see all the photos in which they’ve been tagged, streamlining the ‘untagging’ process.

Users must keep in mind though, that even though an untagged image won’t appear on their timeline, it might still show up on other avenues on the social networking web site, such as in searches and on their friends’ timelines.

In addition, the SNS has also revealed changes that will reflect on one more feature. Some apps, when being accessed for the first time, used to ask for permission both to use personal information to tailor the experience and to post to the site, on one confirmation screen.

Now with the functionality currently rolling out, users will be asked for access confirmation separately (images above and below). So they can choose to let the app read their friends list, but deny access to post to the site on their behalf.

These updates, which include Facebook privacy shortcuts, changes to the activity log and an easier way to keep tabs on the photos in which users have been tagged, will start making their way into users’ lives by the end of 2012.