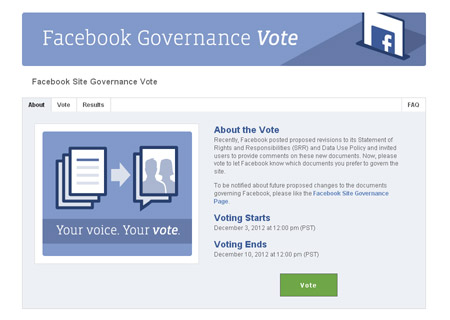 Facebook is taking a vote on its policy changes and users are urged to make their opinion count. The polls close on Monday, December 10, and if by then 30 percent of all active registered users haven’t cast their ballot, the results will merely be advisory. However, if more than 30 percent have voted, the results will be binding.

On November 21, 2012, the SNS announced a few ‘proposed’ updates to its Statement of Rights and Responsibilities (commonly abbreviated as SRR), and to its Data Use Policy in order to restructure the site governance process, inviting users to provide their thoughts on these proposed changes. Since then, the floodgates have opened and the social networking giant has received an overwhelming amount of comments and messages.

Facebook has since updated these documents, taking into consideration feedback received through the comments and is now putting its policy changes to a vote. What’s more; those who plan on making their view known have the option of promoting or sharing this ballot business, just like practically everything else on the SNS.

Users posted comments citing the Berne Convention to protect their copyrights and apparently people got hung up over the fact that posting content covered by IP rights, grants the Zuckerberg-owned company a ‘non-exclusive, transferable, sub-licensable, royalty-free, worldwide license,’ subject to their privacy settings. 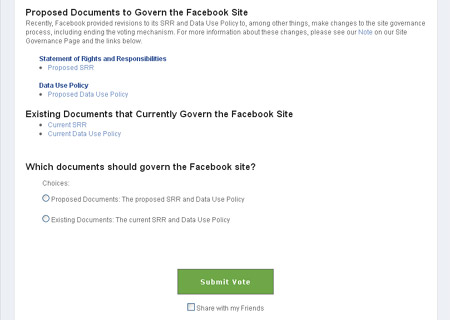 People also wanted clarification on the site’s policy regarding sharing information with its corporate affiliates. Here’s a look at what the changes to Facebook’s SRR mean (if the proposed documentation is passed):

1. The current voting system for site governance will be done away with, and users will be able to have discussions directly via the ‘Ask Our Chief Privacy Officer’ feature.

2. Some ‘language’ has been added to clarify sharing of user information with its affiliates to make certain services more efficient on the site. This family of companies includes the recently acquired Instagram and will be done in compliance with applicable laws, obtaining permission when additional consent is required, Facebook says.

3. Also added are some explanations and reminders about its privacy controls such as the difference between privacy settings and preferences when it comes to timeline visibility.

4. The changes also include clarification, ‘additional language’ as it’s called, on its advertising policies, and as the company has come out and said that adding this language does not mean that its advertising guidelines have changed. These guidelines forbid advertisers from displaying content that pertains to sensitive personal characteristics such as religion and ethnicity.

As of December 6, the result of the Facebook vote on its policy changes is leaning towards the old documents, with slightly more than 58,000 users agreeing to the recommendations in the proposed documents and a little over 330,000 users opting to stick with the old set.