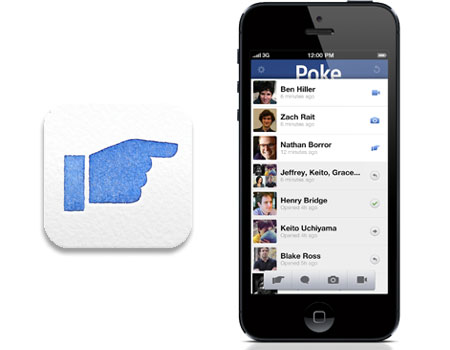 Facebook Poke, an app for mobile, has been released to let people poke each other on the go. A part of the social networking service since it was launched in 2004, the feature now comes to the iPhone and is supposed to infuse the site’s mobile experience with an easy and a fun way to ‘say hello to friends.’

The poke application allows users to give out information on where they are when they coyly nudge a friend. The program even lets users poke individual friends or many of them at one go. In addition, in the spirit of saying hello, with the app, users can send a message, a photo, or a video to friends in a ‘lightweight way,’ as the SNS puts it.

Messages sent can be set to ‘expire’ – another way of saying self-destruct – in an inspired Mission Impossible manner, after a fixed duration of time, which currently presents options of 1, 3, 5 and 10 seconds. The message disappears from the app when the timer has finished counting down to zero. 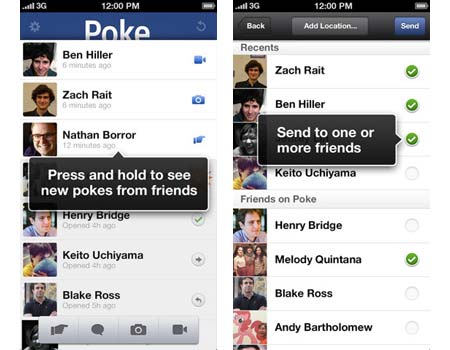 The app for iOS is compatible with all iPhone models, from the 3GS to the latest one, 3rd, 4th and 5th generation iPod Touch models and the iPad. And although it requires that Apple users run iOS 5.1 or later, it has been optimized for the iPhone 5.

And as a control measure for potentially hazardous self-destructing messages, the social giant allows users to report anything they consider inappropriate or that they’re uncomfortable with, from the tiny gear menu.

In other Facebook developments, the company began rolling out changes to its interface recently which included new privacy shortcuts. In addition, there were enhancements to the activity log and a few other tweaks making it more convenient for users to ‘untag’ themselves in the plethora of photos that pointed to them. 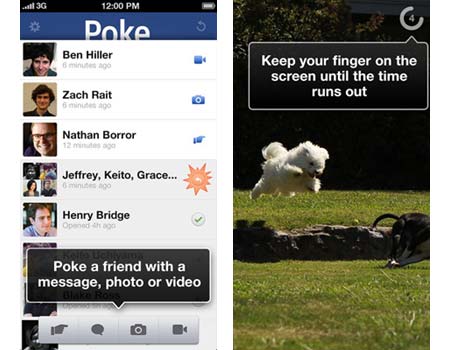 Yesterday also saw the Zuckerberg-owned multinational begin a little experiment which allowed users to pay to have messages delivered to the inbox of a stranger. A small portion of the site’s users were granted this ability and would be charged $1 for each message routed from the Others folder into an unknown person’s inbox.

iPhone users can download Facebook Poke for mobile from the iTunes store which comes in an 8.6MB package. It has been made available for free.