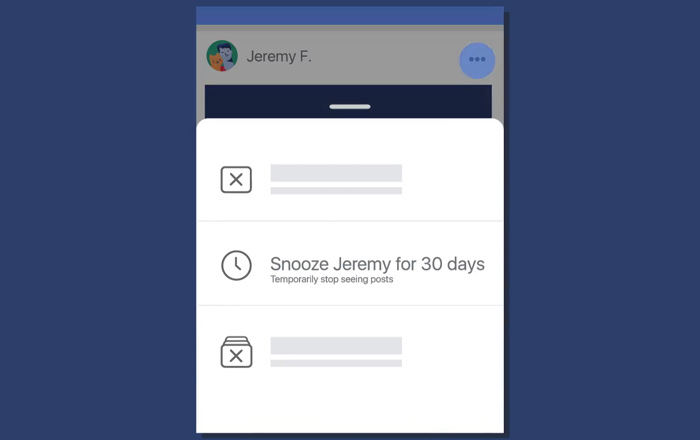 Facebook’s finally waking up to the realization that there are a lot of annoying people on Facebook which users don’t want to hear from. It’s been testing out a Snooze feature to get around this problem for a couple of months now and is now rolling the button out for everyone.

Activating Snooze simply stops all posts from a friend, page, or group for 30 days. Facebook already has options like Unfollow or Hide to get around seeing unwanted posts, but the new feature is a convenient choice for individuals who just want to temporarily avoid their friend.

Plus, it saves them the trouble and awkwardness of straight-up unfriending someone. The other person, page or group won’t be notified about the fact that they’ve been silenced for 30 days. The user doing the snoozing will be told when their brief break is about to end. There’s also an option to reverse the feature if they regret their ban.

Snooze can be accessed by tapping on the top-right drop-down menu of a post. It’s actually part of Facebook’s new push towards improving the News Feed experience, giving people more control over what they see and when they see it.

Facebook published an in-depth look at social media recently, questioning whether spending time on networks like itself was bad for people. It found that members who passively scroll through Facebook felt worse than people who actively interacted with others.

This is a bit of a convenient finding since Facebook has been working overtime to increase engagement over the past few years. In any case, users can look forward to better News Feed quality, free of clickbait and fake news.