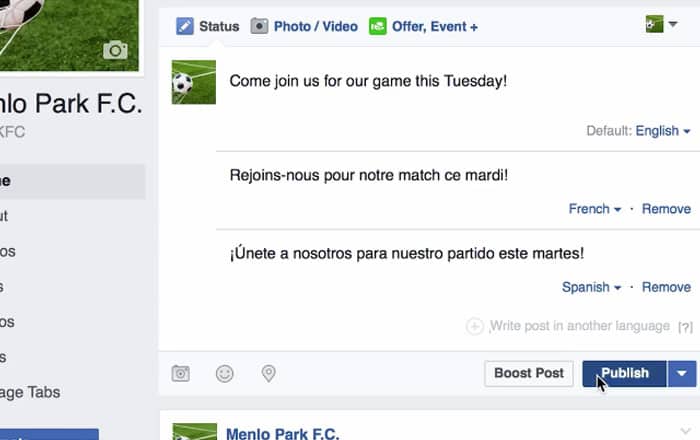 Facebook has more than a billion users worldwide, but most of its members don’t speak the same language. While the social network already has tools in place to cater to its diverse consumer base, people couldn’t actually write posts for their friends in different languages without having to go through Google Translate first.

This is all set to change now thanks to the arrival of Facebook’s new multilingual composer. The feature was introduced for Pages earlier this year and is currently rolling out to select individuals. Using it is pretty straightforward. For instance, if a user writes a post in English, they’ll see a message asking them if they want to write the post in another language.

Clicking this opens up a drop-down list of over 45 languages to choose from. Individuals can convert the post to as many lingos as they like. There’s a chance the translated text could be inaccurate of course, given that Facebook relies on a machine to do the deed. In that case, users are free to modify the post if they can spot the mistakes.

Also See: Facebook is shutting down its news-reading app Paper

It would actually benefit Facebook if they did so, since it’ll train and improve the company’s AI machine learning tool. On the friend side of things, they’ll see the post in a particular language depending on their current language settings. Preferences are usually determined by a mix of user settings, the country they’re in, and a language identification process.

The last one analyses the tongue which a person usually utilizes on Facebook to communicate. If the post hasn’t been translated to a member’s preferred lingo then it’ll appear in the original language as default. Viewers can then click on the See Translation option to convert it for themselves.