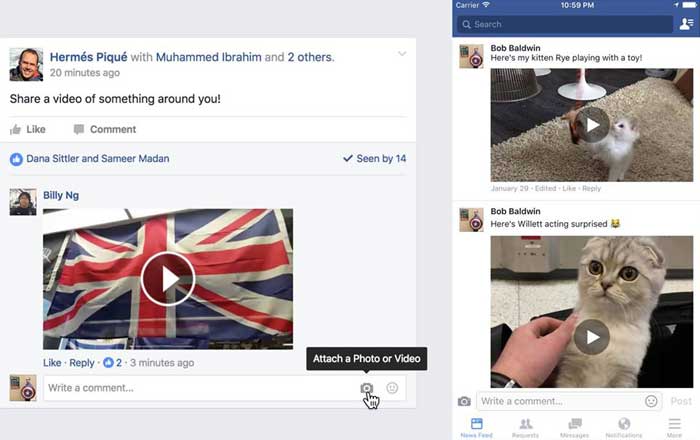 Facebook’s obsession with video has been well documented over the past few months, with the site going all the way in its efforts to bombard people with moving images. This has reached a whole new level now with the announcement that people can post videos in comments.

As per a blog post, the team behind the project apparently assembled the project in just a day’s time during Facebook’s 50th Hackathon early this year. It was later refined over the course of a couple of months as a side project with coder Bob Baldwin at the head of the initiative.

Thanks to the team’s efforts, you can now upload videos into comments and replies on Facebook posts. The feature will be accessible across desktops, Android and iOS. All you have to do is tap on the camera icon next to the comment field, just like posting an image.

The addition of the feature means you now have a wide array of choices to express your thoughts in namely photos, emoji, links, stickers and video. There aren’t any limitations to where you can post videos either, so you can upload them into posts by people, pages, groups and events.

Facebook’s other recent video activities include partnering up with Blizzard to allow users to live stream their gaming exploits. Players will also be able to log into games through their Facebook credentials. The social media giant also upgraded its Live platform last month to support 24-hour long continuous broadcasts without replays.

Videos in Comments will be rolling out to all Facebook platforms in the next few days and should hit global availability soon.