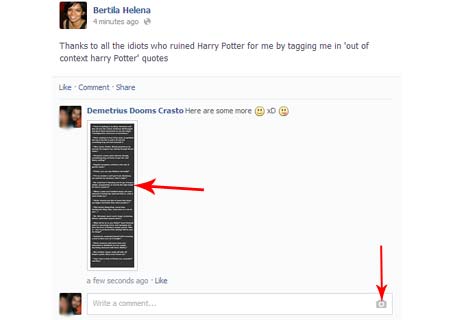 Since words just aren’t enough at times to express something on Facebook, photos can now be added in comments to deliver visually rich messages. Facebook is making continuous efforts to improve its services and the latest abilities which have been introduced over the past few months have been very much welcoming.

The ideal goal behind photo comments on Facebook is to make conversing with others more expressive and engaging. Unlike first where only a link to an image would appear, users will now be able to attach the picture directly into their post. The tool was announced by Bob Baldwin who’s a product engineer at the SNS, on his personal account.

According to him, the feature was designed at a hackathon along with a group of coders. Those using Google’s Chrome browser will be able to copy-paste a picture straight from the clipboard. The ability to embed images on Facebook isn’t accessible by everyone. The only way to know if the feature is available is by looking out for a camera button on right side on the text field, which is similar to the one seen in the status update interface.

The option seems to be currently limited to profile streams and not pages. While popular image formats are supported, GIF animations aren’t on the list. The ability to tag people in comments and even make replies was incorporated back in March and in April, the SNS took things to a new level by allowing users to edit their posts. Just last week, we’ve seen hashtags go official as well.

As we’ve mentioned earlier, adding photos to comments isn’t available to everyone just yet. However, Baldwin does assert that it will be rolling out to everyone soon. In other news, the social network is expected to announce a couple of new products at an event today, which could be an RSS reader and video support for Instagram.