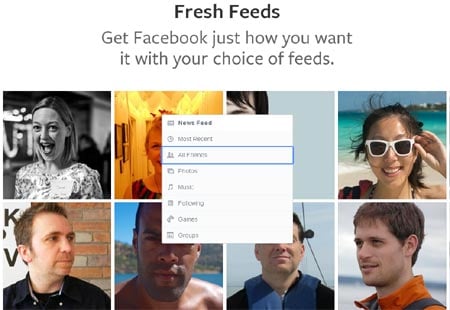 Facebook has announced a new look News Feed and all the hype attached to the press event seems to be just an unabated use of smoke and mirrors. Unlike Graph Search, this refreshed take on things is well just that; a new look. The former brings a whole new way to find things on the SNS, but the most recent update adds little in the way of functionality, although it must be said a change in setting gives it a fresh perspective.

The new visage of the Facebook News Feed has been designed to be more vibrant. ‘Today we’re announcing a new version of Facebook designed to reduce clutter and focus more on stories from the people you care about,’ the company says in a release. It is aimed at highlighting content that’s shared between friends.

A report yesterday had predicted this change in size for photos on the site. In addition, it also detailed a little more. Advertisements were also supposed to sport larger images, although we haven’t heard anything official on that with the announcement. And then there was that bit about Instagram.

But enough of what’s missing. Let’s delve right into what the update has added. Like we’ve said, there isn’t a big change in the way things can be found, but rather better categorization has given the social network a minor facelift. The news feed can be split into 4 little streams, each focused on a single aspect of the site.

For example, the ‘All Friends’ tab will only display things that a user’s friends have shared. Then there is a photos tab which has nothing but the images from friends and liked pages. Finally the music tab pulls up posts about the music that people like, while the ‘Following’ feed will show updates from celebrities, news sources and pages followed. The video above explains it all nicely.

And just like Ubuntu’s new philosophy to have a single distilled ecosystem, the latest release aims at unifying the new experience across all platforms. In this regard, the site’s look and feel on the web, mobile and tablet is similar. A left-hand menu is never far away and users can jump to the top of the main feed whenever something new is posted. 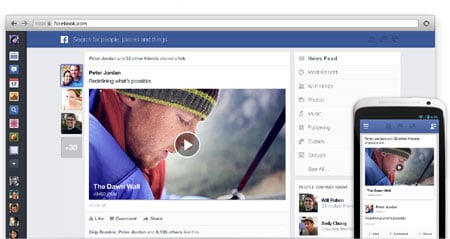 Unfortunately for those eager to make the jump – those gunning for Obama and a new breed of change – may be made to wait as the updated Facebook New Feed is something that will be rolled out gradually. The company has done this with other changes too. In the coming weeks, iPhone and iPad users will get their hands on the design changes, while Android customers can expect to get it soon after.