The Facebook mobile app install ads program, the beta version of which was announced in August, has now been released for developers. According to the official Facebook blog, it is an effective way of reaching more people as well as ensuring application discovery.

Advertisements are being used by many as their growth strategies on the web version of the SNS, and now developers can work towards increasing their reach through mobile applications. The new feature is compatible with most of the games and apps belonging to various categories. The blog reveals that companies like Kabam, Big Fish, Fab and TinyCo tested the beta version and successfully reached their target audience.

Moreover, TinyCo seems to have recorded a 50 percent growth in CTR as well as managed to get higher conversion rates when compared to other mobile channels. It even experienced more player engagement, thanks to mobile ads. A Preferred Marketing Developers’ subset tested Facebook mobile app install ads as well, only to come up with positive results apparently. 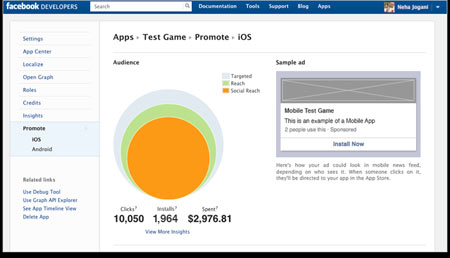 Developers interested in publishing their ads on the mobile apps can do so without hassles and manage them right through their App Dashboard. Besides leveraging Power Editor and the API, they can choose to take assistance from Facebook’s PMDs who can help with creating and managing their ad campaigns.

While there are ad capabilities that are utilized for advertisements on the website, the social network has introduced certain mobile specific attributes as well. As soon as end users click on one of these ads, they will directly be taken to the application’s page on the Google Play store or the Apple App store.

And that’s not all. App designers can make use of Facebook SDKs to track their progress. Updating applications with the SDK will lead to optimized ad delivery too. The social networking website says it will continue to upgrade the service for an improved user experience.