An updated version of Facebook Messenger for Android is being dished out right now, and the only new feature it brings with it is the ability to doodle on your photographs before sending them across to your contacts. This new ability will help you better annotate your photographs in a number of different ways, depending on how you use the feature and whether you care.

The Messenger app which will soon be the only way you’ll be able to chat with your Facebook friends, received this update through the Google Play store recently, and was spotted first by Android Police. The developers of the app have made sure that using the new doodling feature will be a very simple task indeed. 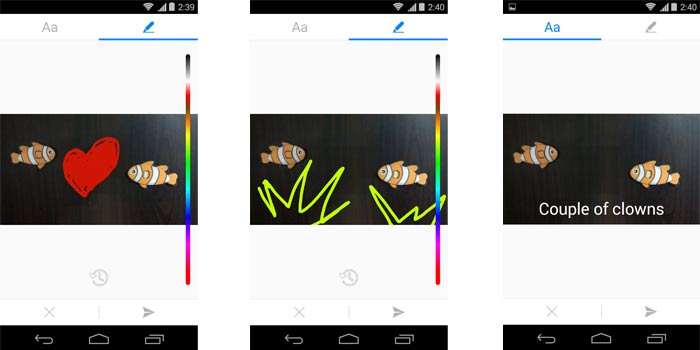 When you’re chatting with any of your contacts and wish to send them an image, you can perform the usual action of tapping the photo icon in the bottom row. A roll of you pictures shall then appear, and once you’ve chosen the one you wish to send across, the new addition will come into play.

After clicking on the desired image from the roll, two options will appear, with one of them asking you to edit the photograph and the other allowing you to send it as it is. You can then either add text in a standard white colored font or use you fingers to draw lines yourself. Handy color selection and undo tools will accompany you in the process as well.

Like we said, the new update to the Facebook Messenger application, complete with its facility to let you doodle on your photographs is live now on the Google Play store.