Facebook Messenger redesigns and adds 1500 emoji across all platforms 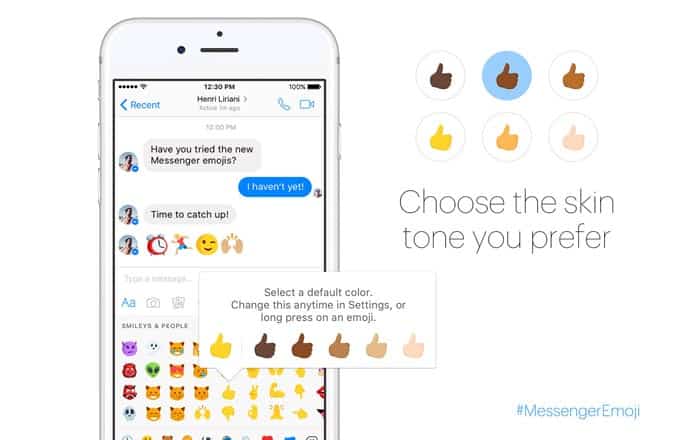 Facebook has decided to go big with emoji, even as it has equipped its Messenger with 1500 newly designed ideograms that can be used across all platforms which the messaging application exists on. The new graphics are aimed at embracing diversity in terms of not only skin color but all other social issues like women representation and same sex relationships.

To be clear, what Facebook has done is take all the emoji from the Unicode database and redesign them on its own. So as much as it will be exciting to spot some diversity in them, it will also be equally exciting to have a look at the new designs.

At the moment, hand gestures on Facebook Messenger can only be used with the social network’s traditional blue and white scheme. However, when the 1500 new emoji are deployed within a few days, you’ll be able to choose the color of the skin, just like on WhatsApp and other applications.

Moreover, Facebook’s design team has even giving women some much needed representation in its emoji system. This is an issue that was raised recently by some Google employees with the Unicode Consortium.

Messenger will now have emoji of women in professional attire as well as emoji of them performing a number of activities like swimming, running and surfing. The emoji for signifying love between two people will moreover have two women rather than a man and a woman, in order to support same sex relationships.

This change in Facebook Messenger is a welcome one, especially since it will be making its way across all platforms, thus ensuring that no more black boxes pop up in your chats due to your device not supporting the sent emoji.