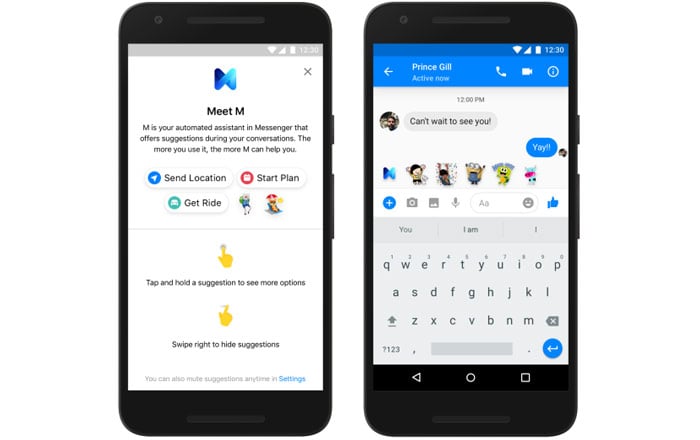 Facebook’s spreading its AI smarts to the general public with the launch of M, yet another intelligent assistant that’s supposed to make a person’s life easier. The virtual butler was initially announced a year ago and has been in testing ever since among a small group of people.

M is now available for all Facebook Messenger users residing in the US. The tool uses artificial intelligence to recognize the intent of an ongoing conversation and pop up with helpful suggestions. For instance, it’s supposed to help put together a plan if people are talking about meeting up and help them book an Uber or Lyft to get there.

M also suggests stickers for when a person wants to say goodbye or thanks in a conversation. The digital assistant can even suss out chats where money is involved, asking the participants if they want to send or request money. Individuals will also be presented with the option of sharing their current location if they’re asked about their whereabouts.

M depends on machine learning techniques to get better over time. People can choose to ignore a hint if it’s not relevant. Swiping right hides a suggestion, while tapping and holding one opens up more options. They can even silence it forever by muting it in settings.

As Facebook puts it, M suggests things that are already present in Messenger but were not widely known. In that light, the AI bot serves as a sort-of advertisement for its goods. It remains to be seen how popular it’ll be among users who may or may not want a robot suggesting actions they can take while talking to a friend.

There’s also the privacy factor to consider since consumers might not like the idea of Facebook’s AI tool constantly reading their conversations. M is US-only for now, but will reach other countries eventually. You can download Messenger via the Play Store or App Store.