The revamped Facebook Messenger app for Android and iOS has reached Google Play Store and Apple iTunes. Early this month, we had reported about the company testing it communications tool for Android devices. Now the update is out for everyone using gadgets running either of the two said mobile operating systems.

Among the top new things about the application is its faster start-up time. So after dealing with the ‘biggest offenders’ holding up the ability to let people dive into Messenger as quickly as possible, Facebook is finally able to boast about offering users a speedier experience. 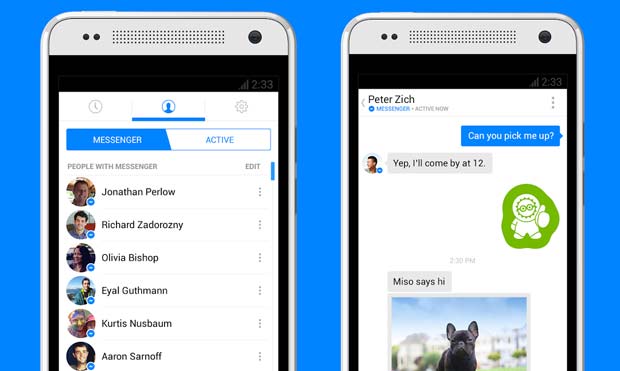 From now onwards, it’ll be easy to find out if a particular friend is using the application by looking for the blue circle with a wavy white line at the center, next to their name. With this update, the developers have ensured you have the freedom to heckle people you text even if they’re not your Facebook pals.

And users will need to register their number by confirming it so that others can find them. The overall interface has been broken into three neat sections and browsing through them is as simple as swiping to the left or right.

Each of these sections lines up recent conversations, settings or the list of contacts you chat with. The app can be downloaded for free and includes the ability to let you make calls, share your location, record voice messages and so on.

You can hit up this link for the iOS version of Facebook Messenger. Its Android edition can be found here.