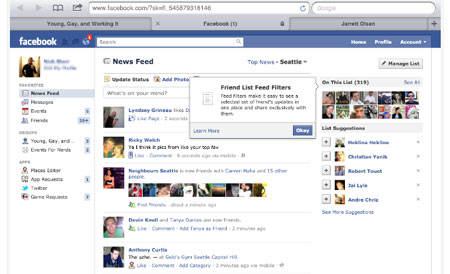 With Google+ on the loose, Facebook appears to be hard at work to ensure that members have no reason to get distracted and turn around to check out what Mountain View has to say on social networking, if the Facebook friend filters in News Feed is considered. The new changes are being tested for the site, reports Mashable.

The tweaks to News Feed is said to involve friend list filters and Smart Lists for intuitively categorizing friends. ‘Feed filters make it easy to see a selected set of friend’s updates in one place and share exclusive with them’, says the guide accompanying the feature. The screenshots posted along with the story seem to imply that this feed is being broken into lists to somewhat mimic what Google+ offers with Circles.

Smart Lists is being remarked upon as one of the highlights of the reworked News Feed element. This introduction automatically sorts friends into a list for workmates, one for classmates and yet another for acquaintances who reside within 50 miles of the user’s city. Need we say that the added convenience ought to allow members to post updates just for their college friends’ or nearby friends’ eyes with ease.

Facebook already has a Create Friend List function, but not many members seem to know or care about its usefulness. The speculated changes should bring it to the forefront and cajole people into employing it optimally. As for now, no one from Facebook has come forward to officially confirm or dismiss the notion of introducing friend filters in News Feed.