Facebook Live videos can go on and on and on

Facebook Live videos can yet make a reality ‘TV’ star out of you, with 24-hour long streaming being enabled through the company’s Continuous Live Video API. The only catch is that such content cannot be replayed. The feature should come in handy for everyone from video bloggers to advertisers to nature camera broadcasters to news channels and more. It surely is a daunting launch for rivals like YouTube and Periscope to compete against.

By not allowing replays, Facebook can shirk the server cost of hosting these ultra-long Live videos. It’s being tested by a small pool of content providers including Bleacher Report, Disney and CSPAN. Even explore.org has been trying it out for ‘puppycam’ and nature camera broadcasts. The social network introduced its Live API at the F8 conference in April this year. Over 100 companies have signed up for it since, up from the initial 12 at the time of its release.

Earlier, live video streams on Facebook were limited to 90 minutes each. 24 hours of continuous broadcasting capability puts an extremely powerful tool in the hands of publishers or businesses who want to grow their audience through social media. The feature accommodates on-screen graphics, ‘geogating,’ multi-camera broadcasts, ‘age-gating’ and time-bound expiry limits. ‘Geogating’ restricts the visibility of streaming content to particular locations.

‘Age-gating’ permits the placement of age restrictions on content. Additionally, broadcasters can set their Live video to expire at a certain time. A new Pew Research report says that 62% of US adults get their news from networks like Facebook and Twitter. 24-hour Live videos might offer news outlets more incentive to cover developing stories directly on Facebook and thus easily reach users who are always signed into the website. 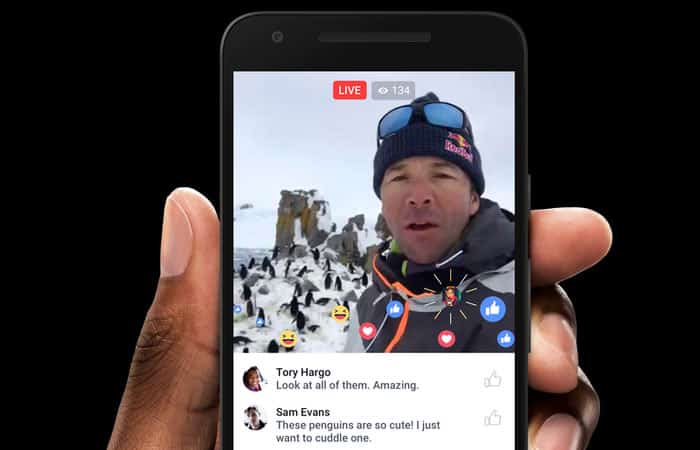 But the lack of a replay function might pose a hindrance. As the company’s head of video (Fidji Simo) told TechCrunch, Live videos are watched after they finish streaming, at least two-thirds of the time. (On a side note, this trend may be why Periscope broadcasts are now being saved by default.)  So Facebook is checking out the feasibility of allowing users to comment or ‘react’ to a Live video as it is streaming. This will enable people to skip the boring parts of a broadcast or jump to interesting points.

While fast-forwarding through recorded replay, an engagement graph will be superimposed on the progress bar (as seen in the image above). Since Facebook isn’t permitting replays of inordinately long Live videos, the aforesaid graph of reaction volume will sadly not be available with it.