Facebook’s tangled web of Like, Follow, Follow Post, Hide all, I don’t want to see this and so on has got one more addition – Unfollow. This time, it’s not understood to be a new feature, but rather a replacement to the Hide all button. The social network is apparently trying to make the term clearer and most people seem to get Unfollow better than Hide all.

For those who don’t know, Hide all lets you filter the content streamed to your News Feed. Say you have a friend who frequently posts the lamest updates ever, you could Hide all from so and so (as shown below) and even choose not to see articles originating from the link they’ve posted. 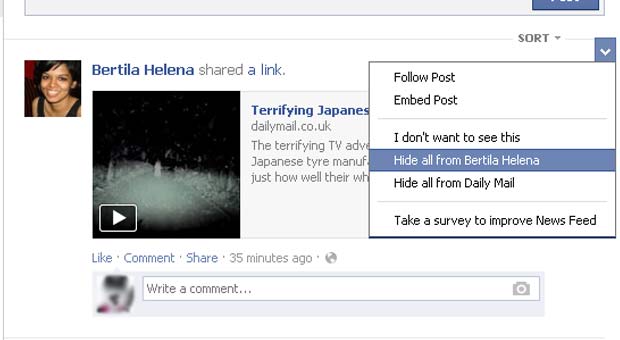 Anyone who’s updates you’ve blocked won’t know you’ve done so and no need for Unfriending them. So everyone’s happy. Now TechCrunch is reporting that the Hide all button will be swapped for an Unfollow option. It’s been noted that sites like Twitter and Pinterest use terms such as ‘following.’

So it might be easier for Facebook members to figure out what Unfollow means. Just yesterday, the social network was seen talking about how it has fine-tuned News Feed to let users get the headlines and updates from pals in one place. But is it being taken to the extreme with so many confusing options laid out?