Facebook is totally into supporting the spirit of giving even if its Gifts feature is getting a downgrade of sorts. It’ll be happy to help you send a present to your pals as long as they’re of the virtual kind. That’s right, Facebook has decided to drop physical items in favor of cards and digital gifts.

This mainly has to do with the fact that only around 20% of gifts sent were actual physical goods, while the rest were digital. Doing away with this should save the company a lot of over overhead costs related to co-coordinating with partner retailers, delivery, customer care and so on. 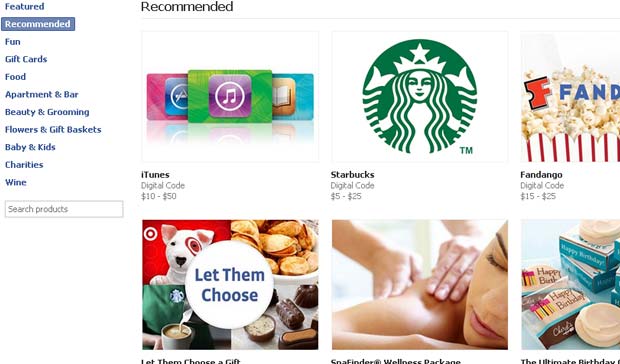 The change is meant to focus on what people want more of and in this case, it’s virtual gifts. In an interview with AllThingsD, Facebook’s Lee Linden noted that it’s a move based on user feedback and also admitted about the extra work needed to keep physical presents open as an option.

Clearly not having learned from its Credits mistake, the company has even taken the opportunity to stress on reusable Facebook Cards which were introduced early this year. How it works is that if you wanted to give your friend a present but didn’t know what to get them, you could put money into one or more retailer accounts and let your pal pick a present of their choice.

All that when you could be saved the trouble if one card was permitted at multiple vendors instead of specifying how much can be spent and where. The revamped Facebook Gifts section has already been introduced to users, though we don’t know if everyone has seen the changes as yet.

What do you think about this move? Does it take away from the variety offered through the platform or do you prefer to stick to the more traditional way of shopping for presents?