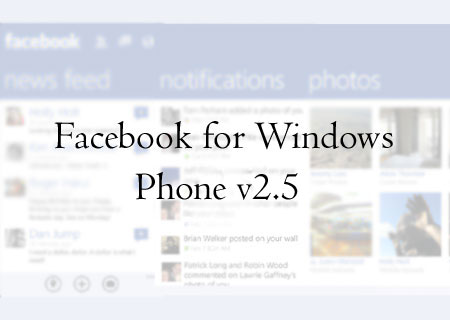 It looks like the Facebook for Windows Phone application is all set to graduate to version 2.5. And the guys over at the Menlo Park-based social network seem to be listening to what users want. This update is said to bring in a host of enhancements and various new features based on the feedback received by the SNS.

Amongst the long list of improvements expected to roll out with the update, users will be able to access their Facebook messages including those received from groups, in a threaded view that flaunts the Metro style design. On uploading images or sharing locations, the application now allows friends to be tagged in posts by simply adding in the words ‘with’ and ‘at’ before the person’s name or the geo-location.

“The team has been working hard over the past few weeks on building the next version of Facebook for Windows Phone, and as we’re getting close to release we thought now would be a good time to share with you some of the upcoming features you’ll be finding in v2.5,” states a post made on the official Facebook For Windows Phone page.

Well, Facebook isn’t done yet. Other features planned for the upcoming release include the ability to like comments and access links from posts by tapping on them. The photo comments and likes page has received a makeover as well. And the update should even enable users to delete posts and comments from their wall through the tap and hold context menu.

The Facebook for Windows Phone v2.5 application is currently in the ‘final rounds of testing,’ according to the company. So we’re presuming that the update is most likely to roll out in the coming days or maybe a week.