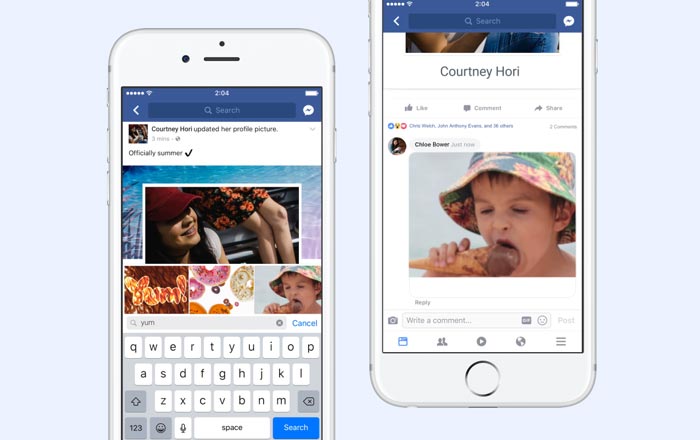 Facebook’s celebrating the humble GIF’s 30th birthday by allowing users to post them in comments and releasing a few of its own. The former has been an in-demand feature for ages now, so it’s nice to see the company finally changing its anti-GIF policy.

We first got wind of Facebook’s changing attitude towards GIFs back in March this year when the brand confirmed that it was indeed working on allowing them into comments and was testing the looping animations among a small group of people. They’ve been a part of Messenger since 2015, with the firm claiming that users have sent over 13 billion of them in the last year alone.

Perhaps this popularity is what prompted Facebook to have a shift in heart with regards to its main site and app. Now anyone can insert them into comments by tapping on the new GIF button placed in between the attach and sticker buttons.

Also See: Facebook could spy on you through your phone’s camera

Facebook hasn’t said anything about allowing GIFs to be shared directly in News Feed yet. We’ll have to wait and see whether that becomes another new addition in the future. Till then, you can weigh in on the age-old question of whether or not the word GIF is pronounced with a hard or soft G.

Facebookers in the US will be directly asked the question via a new poll which is set to appear over the course of the next few days. Passionate opinion-havers can head straight to the brand’s official page on their phone to cast their vote.