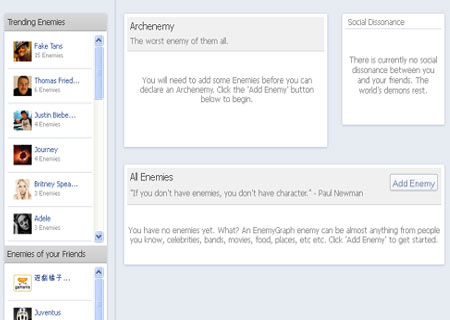 It appears that freedom of speech has hit an all new level on Facebook through the EnemyGraph app. This tool apparently allows users to publically share their antipathy towards anything on the social network.

So here’s what the application is generally about – users can classify friends, foods, products, movies, books or various other stuff on the social network as an enemy. The project was conceptualized by college professor Dean Terry, and built by graduate student Bradley Griffith, and undergraduate Harrison Massey. At present, the app has managed to mount up around 400 users since its launch on March 15.

Dean Terry, director of the emerging media program at University of Texas, told Mashable, “One thing that has always struck me is the enforced niceness culture. We wanted to give people a chance to express dissonance as well. We’re using the word enemy about as accurately as Facebook uses the word friend. You can actually learn a lot about people by what they’re upset about and what they don’t like. And the second thing is that if you and I both don’t like something that actually creates a social bond that hasn’t been explored in social media at all, except with Kony and some big examples like that.”

Social network websites like Facebook help users connect with each other based on common interests such as a band, film, artist and even a particular brand. And according to Dean Terry, things that people dislike can also be filed as a relating factor. So could the entire concept of making ‘enemies’ or showing dissonance towards things online be another way for users to communicate?

The EnemyGraph app can be accessed by all users on Facebook.