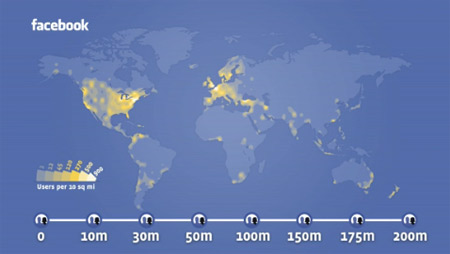 Facebook has had a strong going till now and just on Wednesday, Mark Zuckerberg welcomed the 200 millionth “active” user to Facebook in his blog.

Well if he is talking of unique users or the number of active accounts on the popular social networking site is not known, yet 200 million users (unique or not) is a reason enough for Facebook to celebrate it seems.

It means a lot to Facebook, because, it took 20,000 years for the world population to get to 200 million people, because it would take 46.5 years for 200 million babies to be born in US, and so on! And so, 200 million is just not another number, it is a big number you see. Cheers Facebook!

Anyway; the CEO of Facebook has explained how the service is all about providing a richer and faster medium of sharing information to the users with which they can keep a track of what is happening around them. And it has also been a platform for some social movements.

“Both U.S. President Barack Obama and French President Nicholas Sarkozy have used Facebook as a way to organize their supporters. From the protests against the Colombian FARC, a 40-year old terrorist organization, to fighting oppressive, fringe groups in India, people use Facebook as a platform to build connections and organize action,” said Zuckerberg in the official blog post.

As a way of celebrating the achievement, it has been announced that the Facebook team is creating a “space” on Facebook which will allow the users to contribute their stories on their experiences with Facebook. Also, the team is in works with 16 charitable and advocacy organizations to create gifts that are available in the site’s gift shop. And 90 to 95 percent of the cost of the gift (after administrative expenses for the transaction) will be used to support the cause and will not be used by Facebook.

Facebook made its debut in the world of online social networking five years back in 2004.