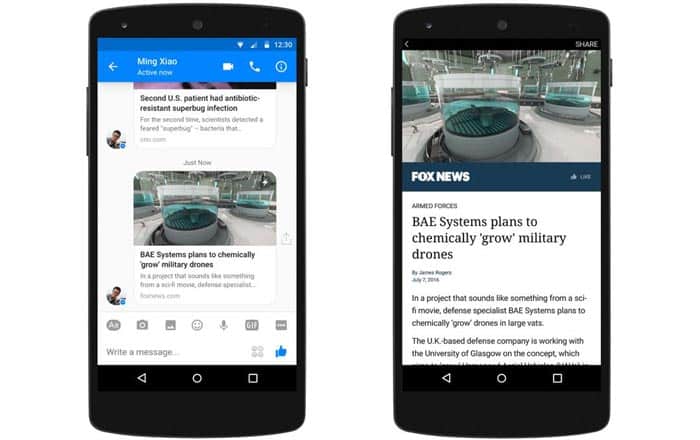 Facebook is introducing Instant Articles to its Messenger platform, nearly a year after the feature had made its debut. Users will now be able to open up links faster, with the brand claiming that the tool makes pages load up to 10 times faster than ordinary web links.

The secret behind Instant Articles‘ swiftness lies in the fact that Facebook pre-loads pages beforehand, which means shorter loading times for photos and videos as well. Messenger users can experience this for themselves now. Links which support the tool will show up with a lightning bolt symbol in the top right corner.

Clicking on an Instant Articles-supported link automatically opens up a window within Messenger itself, instead of going through the trouble of being transferred to the default browser. This helps cut down on loading times for users, while still helping Facebook since it keeps them within the app’s walls and makes sure they don’t wander off.

Support for Instant Articles has already started rolling out for Android users all over the world. It’ll hit iOS in the next couple of weeks. It’ll be yet another feather in Messenger’s cap, arriving amid a slew of other features in Facebook’s quest to position the chat app as a person’s primary communication tool.

For instance, Facebook recently brought end-to-end encryption and self-destructing messages to Messenger. Privacy concerns are at an all-time high right now and the company is attempting to build on that buzz by offering its own take on secure chats. The former is not switched on by default though, with users having to actually opt-in for the feature.