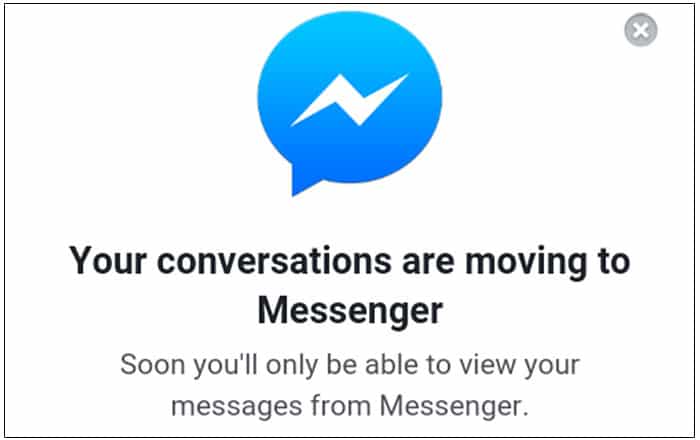 Facebook has come up with a new strategy to force people into downloading Messenger by taking out the ability to access chats via its mobile web application. The change isn’t widespread yet, but it’s only a matter of time before everyone will have to fall in line with the site’s draconian way of increasing its standalone app’s user base.

To recall, Facebook had previously compelled consumers to switch to Messenger by removing access to conversations within its main app. This had drawn a lot of ire at the time from angry people who understandably didn’t want to be forced into getting an app. The new move takes things one step further, snatching away the one alternative to downloading Messenger.

According to TechCrunch, members who try to chat through the mobile site now get a notification stating that their conversations are moving to Messenger. It then goes on to say that they’ll only be able to view their messages on the latter app. Facebook doesn’t state when exactly this will happen, but it’s expected to occur by this summer.

The shift towards such a system will likely affect a lot of consumers, many of whom probably don’t want to be bogged down by another app which will eat into their limited storage capacity. Other reasons could be anything like not being able to upgrade to the latest version of an OS or having a phone which doesn’t have an official client.

While Messenger does offer a boatload of features which the basic web interface doesn’t, the choice to switch from one platform to another should lie solely with the user. Facebook says the change is meant to provide them with the best possible experience, but it’s hard to appreciate that when it won’t even allow them the freedom to voluntarily make the decision.