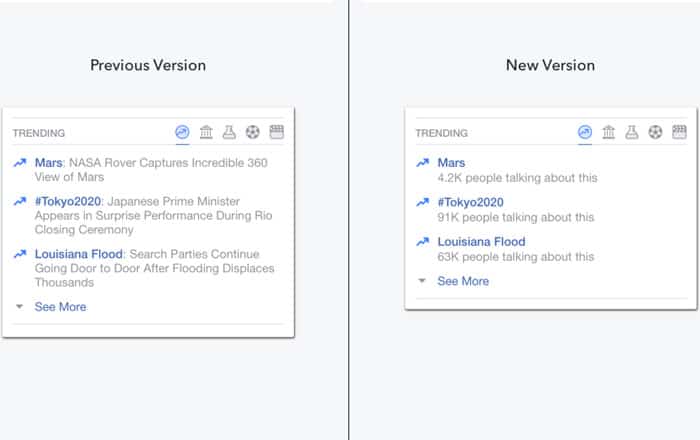 Facebook ran into a major controversy earlier this year when it was rumored that the site was suppressing conservative news in Trending Topics. The company denied these allegations at the time, claiming that an internal investigation had revealed no systematic bias.

With that in mind, Facebook is now taking steps to ensure no one accuses it of political partiality ever again. The social networking giant is seeking to establish itself as a neutral platform by making Trending Topics more automated. Instead of making actual humans write descriptions for the headline, it’ll just display the news next to a figure of how many people are talking about it.

According to Facebook’s blog post, the figure will be based on the number of original posts which mention the subject and shares of posts concerned with the issue. The revamped section now looks similar to Twitter’s own Worldwide Trends segment.

Hovering over any of the headlines will reveal more information about it. Clicking on the link will bring up Facebook’s search results page where users can go through news sources covering it, posts talking about it, and an automatically selected original news story with an excerpt from the top article.

Facebook asserts that everything on this page surfaces algorithmically. However, the site isn’t completely eliminating humans from the process. They’ll still be on hand to sift through subjects to make sure they’re high-quality ones. For instance, #lunch becomes a popular hashtag at lunchtime every day around the world but won’t be a part of Trending Topics.

It should be noted that Trending Topics will still be personalized based on factors like the Pages a person has liked, their location, their previous history with the section, and what’s being talked about across Facebook at the time.