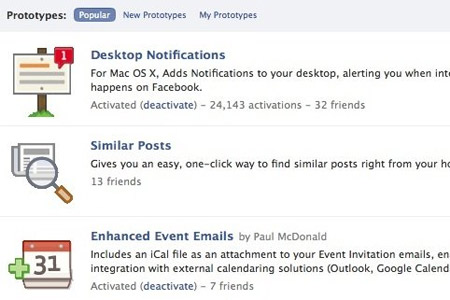 Ever wondered what happens to those hundreds of applications that are made for Facebook but never really manage to make it on the site? Well, users may have to look no further as Facebook offers to give an insight into its innovations and experiments. The official Facebook blog reveals the introduction of Facebook Prototype that displays products which would otherwise have remained confined with the social networking site’s walls.

The team at Facebook always seems to be working on projects that inspire them and allow them to build on novel ideas. However the blog shares that not all of these innovative attributes and enhancements end up on the site. This could be because the feature may not be ready for complete implications or in some cases don’t fit the bill. The company now offers to give a sneak peek into the various experiments that keep the Facebook team busy.

With Facebook Prototypes, users will now have the opportunity to test any of the products and features that the company launches. They can then give their feedback on the same directly to people at Facebook who built them. The blog metes out one such application called Desktop Notifications for Mac OS X that was claimed to be developed during a recent Hackathon. The latter is revealed to be an all-night coding event that allows the Facebook team to build projects they would normally not have the time to pursue.

Developed to keep users updated on Facebook happenings, the app will allow users to receive notifications of activities like photo tags, friend requests or any other action even when they are not on Facebook.com. Users will not even be required to keep checking their emails for these notifications. On activating the application, users will see a Facebook icon next to the computer’s clock. This will light up with a pop-up alert whenever users receive a new notification.

Simply clicking on the notification will allow users to be transported in a new browser window that directs them to the action on Facebook. Users can even choose to just read the notification without really going to Facebook. To do this, all they have to do is dismiss the notification by waving their mouse over it. Allowing users to effortlessly update their Facebook status, the innovative application also offers to keep track of users’ Facebook messages.

In addition to this, some other Prototypes revealed by the company include Recent Comments Filter, Photo Tag Search and Enhanced Events Emails. While the first Prototype enables users to sort their News Feed by items on which your friends have recently commented, Photo Tag Search allows them to locate photos by the people who are tagged in them. As for the Enhanced Events Emails Prototype, with a simple click, it enables users to add a Facebook Event right into their personal calendar in Google, Microsoft Outlook and other calendars.

Elucidating that Prototypes are unfinished versions of products that the company is testing, Facebook reveals that they may come with some kinks needing work. While certain Prototypes may eventually launch for everyone on Facebook, others may in the course of time be removed from the Prototypes directory all together. Facebook further shares that every new product in Prototypes won’t be tested before launch.

Enthusiastic users can access Prototypes by visiting the Application Directory and filtering by Prototypes. Once there, users can choose to activate or download any of the listed Prototypes.