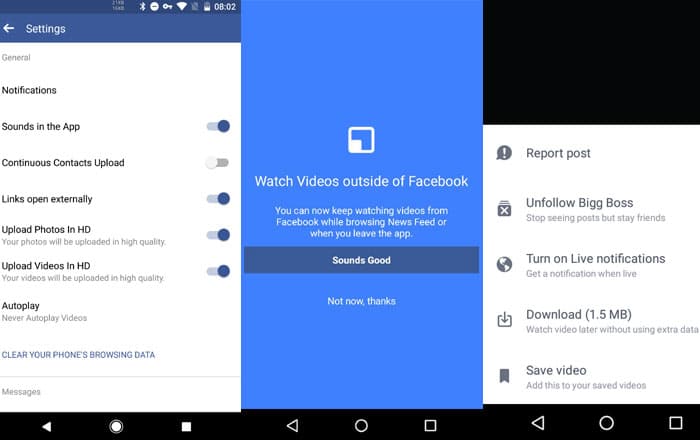 Facebook’s overhauling its Android app from top to bottom with a number of long-overdue features, with a heavy emphasis on videos. The changes appear to be rolling out slowly to all users.

Facebook for iOS has been offering an Upload Videos In HD option for over two years now. However, it’s taken till recently for the company to make the toggle available to Android patrons. They’ll be able to access it within the Settings menu right below Upload Photos In HD.

Another useful feature which will now be in play is picture-in-picture video. The tool lets people continue watching videos within the Facebook app while doing something like browsing News Feed. They can carry on doing so even if they leave the app.

Facebook members will have to sign away a permission request which allows the company to draw over other apps if they want to activate picture-in-picture video. The social media giant has also introduced a new offline viewing option which allows users to download videos for later watching.

The feature effectively helps people save up on data costs, just like YouTube and Netflix’s own offline tools. Facebook also informs people just how much space the video will take up. It’s further allowing them to choose the video playback quality.

Finally, Facebook’s added two up and down arrows so that consumers can conveniently flick through notifications without having to go back to the main notifications page constantly. You can download the company’s Android app via the Play Store.