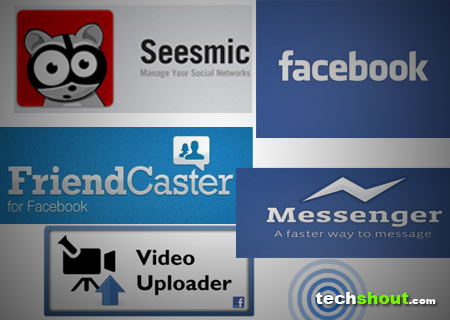 You’re looking up the 5 best Facebook Android apps because the fact that the social network has a mobile optimized website is clearly not cutting it for you. Ever since Apple made application marketplaces fashionable places to be strolling around in, people have been downloading more apps than they know what to do with. After all, there are few other better ways of staying entertained while on the move. So after downloading that app to ‘Photoshop’ an image to show Blade cheerfully presiding over Edward and Bella’s wedding ceremony, you obviously need another one to upload that image to Facebook. If you run through our list, you’ll see that we’ve jotted down Android Facebook apps which should have you covered in all sorts of scenarios. 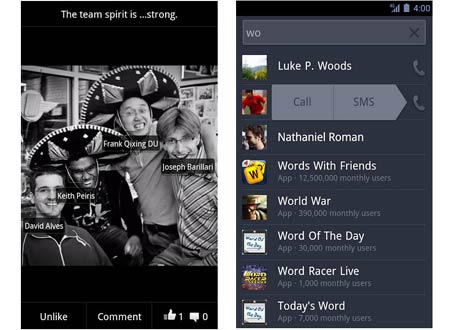 Before being distracted with all the third party apps for the SNS, we’re just going to get the Facebook for Android app out of the way. And we already have a good enough reason for dropping it into our Facebook Android apps queue. It’s the company’s homegrown software and was updated only this week. It features access to mobile timeline, friend lists and subscriptions. Photos and albums are apparently twice as fast as the previous app, while messages and notifications stay put right at the top of the screen. Meaning there’s no need to navigate away from the page you happen to be on. Going by the fact that it’s free, you’d be hard pressed to find an argument for not downloading the app. 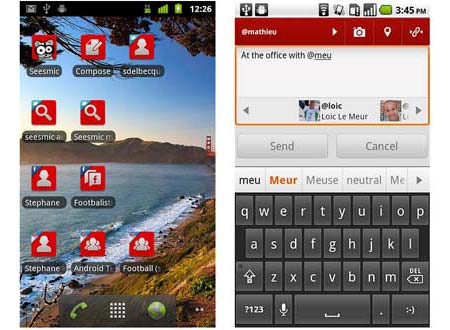 Now not many of us can claim to be faithful to just one SNS. This is where an app like Seesmic comes into the picture. It supports viewing and updating of Facebook, Twitter, Salesforce Chatter, and Google Buzz for some reason. Didn’t anyone tell those guys Buzz is going away? At any rate, cheat on your social networking sites from one single place and even expect support for content sharing via services such as Plixi, yFrog, YouTube and TwitPic. The application includes a widget to help users stay updated and there are notifications for new messages. Adding to the accessibility options, Seesmic also delivers the ability to add shortcuts to accounts, the composer, Facebook pages, searches and more right on the homescreen of the Android device in your pocket. 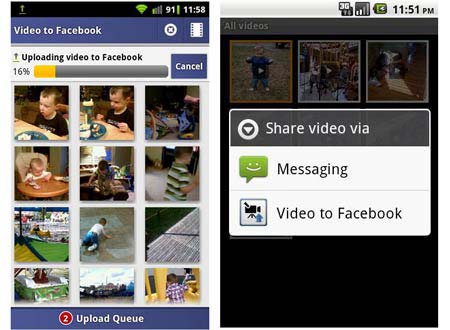 This candidate in our Facebook Android apps roster sticks by its name quite literally. Pick Video to Facebook when you want to upload a video to Facebook. If you need us to spell it out, the software basically allows users to upload videos to their Facebook account straight from the phone. So once you’ve recorded that video of teenage girls crying over Justin Bieber from your device’s camera, it can be posted right onto the account in question, groups or pages. Once the clip is uploaded, it will be posted to your wall and you can tweak privacy settings to make sure you know who’s been watching it. But then you’d probably have to admit to being a fan or have a good explanation for being caught at a Bieber concert. So pick the videos you choose to upload responsibly. 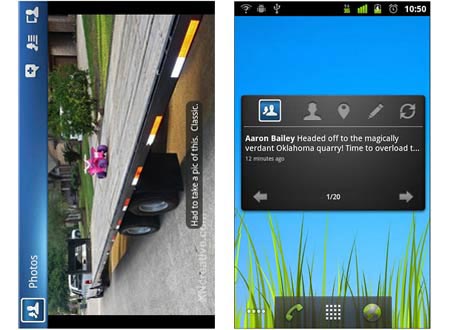 Friendcaster for Facebook is yet another option for dealing with the way in which you engage with the SNS, in case the mobile site or official app is not good enough for you. It packs in a host of features starting with pull to refresh, an ActionBar UI, enforced SSL encryption as well as the ability to add or remove Facebook friends’ photos. For all the ‘sharing is caring’ believers who get restless unless they’re busy uploading content to the SNS, the app accommodates a Gallery function for updating their accounts with multiple photos and videos. Photo filters and enhancements are also there for the taking, apart from the choice to add stickers or text to images. Essentials like the facility to select privacy settings for each post or status and re-share posts are also part of the package. 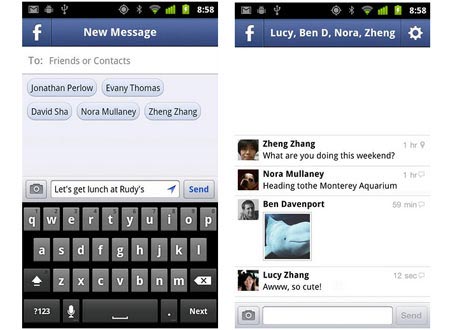 Now Facebook Messenger may not exactly be something you’d expect to bump into among our Facebook Android apps list owing to the fact that it’s simply a messenger app that lets users send mobile messages to friends. But it’s still a Facebook app and available for Android, which qualifies it to sit among our mentions. Again, it’s Zuckerberg and company’s very own application and can be downloaded for iPhone and BlackBerry too. It permits you to chat with friends who are on your Facebook account, add locations and photos to messages and get to pals via text messages even if they don’t have the app. Lastly, you also receive access to sent and received messages on Messenger as well as Facebook.

You’ll see that the choice of Facebook apps in the Android Market is pretty limited. So it’s not like we were in a hurry to cut short this list of the best Facebook Android apps because someone ‘ping’ed us a link to Lady Gaga’s latest music video or something. If Facebook for Android or the mobile optimized site is not your staple app for accessing the SNS, don’t forget to tell us how you get to it on your mobile device.