Is the Exynos Infinity a 64-bit processor from Samsung? Is it meant for the Galaxy S5?

This year’s MWC is set to witness the launch of the Samsung Exynos Infinity processor. While we don’t know the exact details of this chipset, it’d be safe to assume that it’s a 64-bit ticker probably aimed at the Galaxy S5. With its fierce rival Apple having got the 64-bit game on with its iPhone 5S, Samsung wouldn’t want to lag behind.

A tweet from the South Korean giant’s Exynos division has given away the existence of this chip. It accompanies a picture which depicts a bull, and the words, ‘Exynos Infinity in Barcelona.’ This confirms that whatever it is, everything is set to be cleared up at the Mobile World Congress event later this month, so we don’t need to wait long for it. 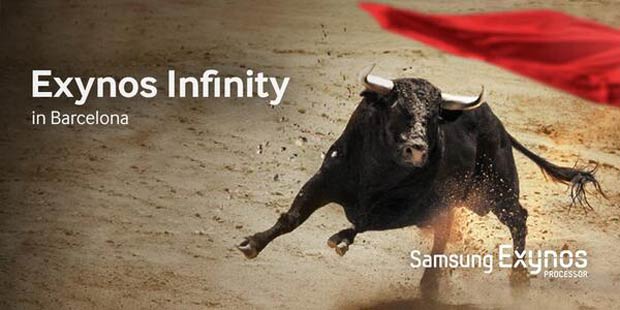 Nothing more has been said by the company apart from this. That it’ll be a 64-bit processor is a guess, but it’s nonetheless a safe one. Firstly, rumors about such a chipset being under development from the company have been around since a long time. And moreover, there’s the fact that Samsung has decided to suffix it with the word Infinity rather than going for the usual nomenclature, thus signifying that it’s a big step forward.

And since the Samsung Galaxy S5 too is slated to be unveiled at the MWC, there are high chances of the Exynos Infinity processor being one of its components. The next-gen smartphone has apparently been equipped with a bevy of innovative features which have been leaked in the past.

We’ll be covering the MWC thoroughly, so make sure to keep visiting the site during the Barcelona event to know more about the Samsung Exynos Infinity, the Galaxy S5 and more.