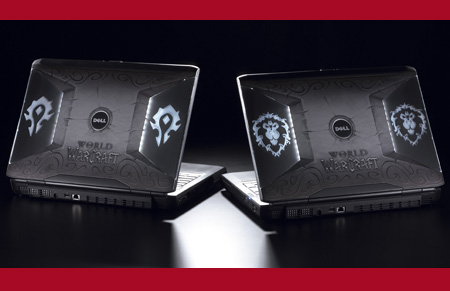 Dell and Blizzard are all set to offer some great gaming experience this December. The two giants have got together to introduce the XPS M1730 World of Warcraft Edition notebook PC. Consumers who pre-registered for early access during the “It Begins” mission, will be lucky enough to get their gaming notebook right away. If not, you’ve just got to wait for five more days to have it in your hands, as the XPS M1730 will be available to all US customers on Dec. 11 on www.dell.com/gaming.

Fully equipped for battle, the Dell XPS M1730 gaming notebook is adorned with some excellent custom WoW artwork in its exteriors as well as interior. Further on, also bundled are exclusive unique bonus items along with a WoW backpack that is filled with game-themed items.

Glen Robson head of XPS systems at Dell said, “This truly legendary collaboration with Blizzard reinforces Dell’s commitment to design excellence and dedication to delivering the best possible gaming experience.” Robson added, “World of Warcraft players can now have the ultimate system to reflect their passion for the game.”