Exclusive iPhone Agreement May Be Illegal in Australia 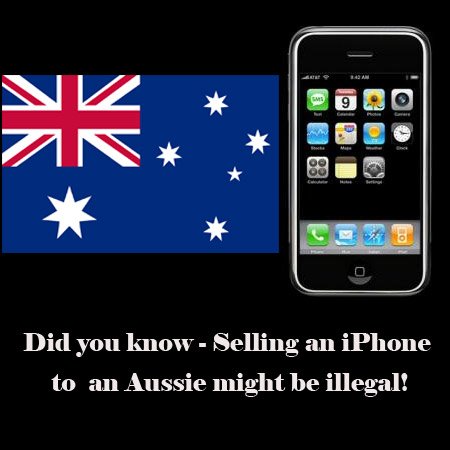 The iPhone’s entry into the smallest continent of the world seems a little dicey and far-fletched as of now!

A group of Queensland law researchers maintain that under the existing trade practices laws, the launch of Apple’s iPhone in Australia would be “illegal”. The reason behind the same would be the exclusivity deal that Apple usually signs with its carrier associates, which is an issue of concern under Australia’s Trade Practices Act provision dealing with third-line forcing. This behavior of Apple is being termed as being anti-competitive.

Speaking on the issue, Queensland University of Technology (QUT) law researcher Dale Clapperton stated, “If Apple enter into an exclusive agreement with any particular carrier then it would be a matter for the ACCC (Australian Competition and Consumer Commission) as to whether that agreement was anticompetitive and contravened the trade practices act.” Adding, “It would be like Ford deciding that from now on all of the cars they produce can only use be used with petrol from Shell.” Clapperton continued, “If you fill your car up with fuel from BP the ignition system will detect that and shut down the car.” “Forcing consumers to deal with third-party companies for unrelated products and services is a fundamentally bad thing for competition.”

The exclusivity deal has led several people to attempt unlocking their handsets, only to find that they stop working, and if it does work the warranty becomes null and void.

The iPhone was initially slated to hit Asia and Australia in 2008. However, with the above mentioned report, that possibility may look a little blurred for Australia.