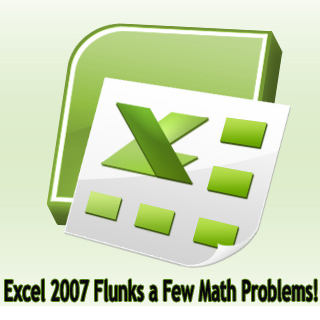 Microsoft has acknowledged that the Excel 2007 version has math issues. It has a bug that can cause it to create incorrect answers for a particular multiplication task. But don’t panic if you are using an earlier version, this issue does not affect previous version of Excel.

Reportedly, last weekend, a few members from the Microsoft Excel Google Group reported that cell operations like =77.1*850 return erroneous results (in this case Excel returns the value as 100,000 when in fact it’s 65,535).

Microsoft has also gone ahead and confirmed this problem on the official Excel Blog and even says the problem is more extensive than originally reported.

It seems that Excel can add, contrary to some headlines, it just doesn’t display the right data in the cell.

This issue was introduced when we were making changes to the Excel calculation logic in the Office 2007 time frame. Specifically, Excel incorrectly displays the result of a calculation in 12 very specific cases. The key here is that the issue is actually not in the calculation itself (the result of the calculation stored in Excel’s memory is correct), but only in the result that is shown in the sheet. Said another way, =850*77.1 will display an incorrect value, but if you then multiply the result by 2, you will get the correct answer (i.e. if A1 contains “=850*77.1”, and A2 contains “=A1*2”, A2 will return the correct answer of 131,070).

But all the same, the Excel team is now working on a fix to this issue and is almost there. They claim to have completed the testing to make sure that the fix works and doesn’t bring in any additional issues.

David Gainer, lead project manager for Excel said, “We’ve come up with a fix for this issue and are in the final phases of a broad test pass in order to ensure that the fix works and doesn’t introduce any additional issues, especially any other calculation issues.” Adding, “This fix then needs to make its way through our official build lab and onto a download site which we expect to happen very soon.”

So once the team is assured of the fix’s success, an update will be made available.