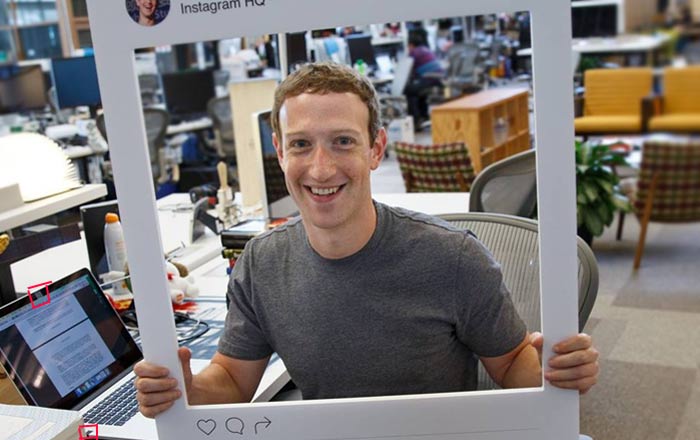 Mark Zuckerberg didn’t realize he would set off a debate on the internet about privacy and security when he posted a photo on Facebook to celebrate Instagram’s 500 million milestone. It was just a simple picture of him holding up a cutout frame thanking the 500 million people who’ve joined Instagram (300 million daily users, by the way).

But one Twitter user Chris Olson, noticed something unusual about Zuckerberg’s laptop – the webcam and microphone were covered in black tape. So even the dictator of the world’s largest nation fears an invasion of his privacy. And why shouldn’t he? Early this month, hackers gained access to his Twitter as well as Pinterest accounts, and gleefully proved this by defacing both.

Apparently, not only was Zuckerberg guilty of using the same access code for multiple accounts, he was careless with his choice of password, which was revealed to be ‘dadada.’ As for covering a notebook’s camera and mic, it’s a good idea that costs nothing and offers basic security. Hackers are capable of remotely accessing a webcam or a microphone and taking control of it after all.

High profile individuals like Mark Zuckerberg may be targeted for business reasons. That does not mean ordinary individuals are safe from such attacks. Cyber criminals could victimize regular citizens for purposes of voyeurism or blackmail. Worryingly enough, it’s not just law-breakers who’ve been reported to spy on innocent folks through their webcams.

Intelligence agencies have been pronounced guilty of the same previously. A suburban school district was charged for taking hundreds of photos of students via their laptop cameras, according to an old Wired story. And god knows which other government-approved bureau is doing something similar even today. So take a leaf from Mark Zuckerberg – cover that webcam and mic.