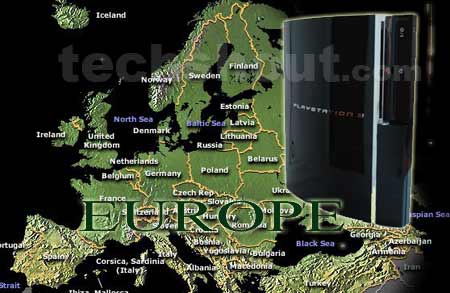 The Sony PlayStation 3 game console is slated to be launched in Europe on March 23, 2007. However, this European model will use different hardware specifications than the models that have already been launched in Japan on November 11, 2006, and the U.S on November 17, 2006.

The European PlayStation 3 game console will thus play fewer PlayStation 2 video games. A Sony spokesperson said, “The backward compatibility is not going to be as good as in the U.S. and Japan models.”

For starters the European PS3 will feature the Cell Broadband Engine, a 60GB hard disc drive, Blu-ray Disc player, built-in Wi-Fi connectivity, and SIXAXIS wireless controller. It will also utilize a new combination of hardware and software emulation which will allow the PS3 to be compatible with a broad range of original PlayStation game titles and a limited range of PlayStation 2 titles.

“PS3 is first and foremost a system that excels in playing games specifically designed to exploit the power and potential of the PS3 system. Games designed for PS3 offer incredible graphics quality, stunning gameplay and massively improved audio and video fidelity that is simply not achievable with PS and PS2 games. Rather than concentrate on PS2 backwards compatibility, in the future, company resources will be increasingly focused on developing new games and entertainment features exclusively for PS3, truly taking advantage of this exciting technology,” said David Reeves, President of SCEE.

Users will be able to download firmware updates, which will be made available through the PlayStation Network or via PS3 discs. Thus, additional PS2 titles will become compatible on the PS3 game console. The first update has already been scheduled for the European launch date on March 23, 2007.

Besides, users will also be able to check whether their titles are compatible with PlayStation 3. This site will again be available on March 23 to coincide with the European launch date.

Over the last 18 months, Sony has had to face a number of public relations disasters that includes a recall of nearly 10 million of its computer batteries, PS3 launch delays and a software program on Sony Entertainment music CDs that breached computer security. Besides, earlier today, it was revealed that Greek gamers would be asked to pay €60 more than other European countries for the Sony PlayStation 3.