The Eton Thor or the Eton Thundergod has a battery most of us wish our smartphones could pack in, a 5000mAh one which delivers 1100 hours of standby time. If you laid hands on the phone, would you be willing to test the company’s word for it? Yes? Good, leave it lying around idle for about one and half months. No touching!

Did the amount of standby time you can squeeze out of the Eton Thor blow your mind? The battery can deliver roughly 55 hours of talk time on 2G networks and 21 hours on 3G. Between charges, that will last more than any smartphone you’ve ever had. 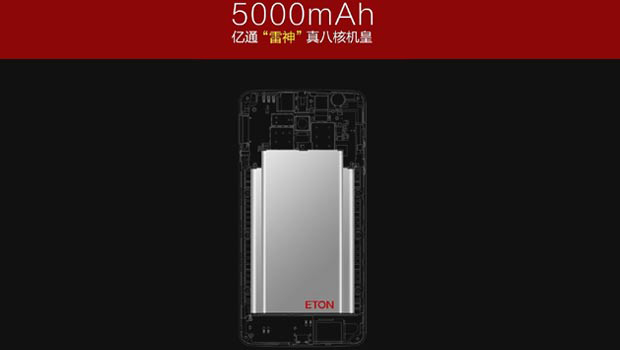 A 5000mAh battery should mean a monstrously large handset, but it doesn’t in this case. The Thor’s 9mm side profile is thinner than the iPhone 4S’s by 0.3mm, as Neowin who dug this up through MTKSJ points out. There’s no word on the sort of display the phone will flaunt.

But we do have a couple of other details about its main features. For starters, the device may have 2GB of RAM and run on Jelly Bean or KitKat, though it being loaded with the latest version of Android is less of a possibility. An octa core MediaTek processor clocked at 2.0GHz or 1.7GHz will also be onboard.

The Eton Thor is not likely to be sold in markets outside China. So don’t go hating on the puny little battery in your current smartphone yet.