We’ve come across quite an interesting smartphone, the eSense Q47, which runs on Windows Phone 8.1 and costs just $110. The price isn’t the only alluring feature here as the device is pretty slim at just 7.2mm and it’s one of the lightest we’ve seen on the market, weighting around 100 grams.

However, these weren’t the only attributes that caught our eyes. The eSense Q47 also looks strikingly similar to the Win Q900s from Xolo which went on sale in India for Rs 9999 (approximately US$146). Design-wise, there’s absolutely no difference between the two phones and the specs are almost similar as well. 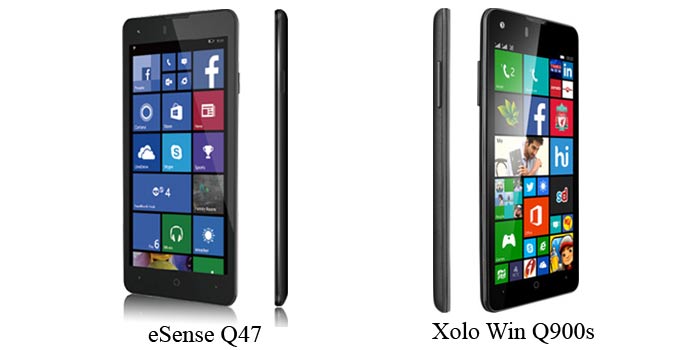 The price of the handset was disclosed by WMPoweruser which also pointed out that eSense is a Chinese OEM. It’s quite strange to see two identical devices from different manufacturers, but there’s a logical explanation to this. Some OEMs purchase their phones from external sources and simply slap on their own brandings.

This looks to be the case here and it’s rather disappointing to know that Xolo isn’t likely to be the brains behind such an alluring handset. Selling devices made by other companies by rebranding them isn’t something that only small OEMs do. There was a report on Android Community which suggested that HP’s upcoming slates were simple rebranded versions of tablets made by Huawei.

Here’s an overview of the eSense Q47 specs:

The eSense Q47 will be released in China soon and it isn’t likely to go on sale anywhere else. As for the Win Q900s from Xolo, the device is currently out of stock in India.