In a surprise move, Videocon has come up with an LED TV which arrives with Windows 10 pre-installed on it. Built for letting users easily switch between watching television shows and using their PCs, this offering has its price starting at Rs 39990.

The new Videocon Windows 10 LED TV is part of a partnership between the Mumbai-based company and Microsoft. The hybrid product happens to be the world’s first such product.

The concept is simple. Have your keyboard and mouse connected to the screen all the time, so that you can switch from watching television to performing PC tasks with the push of a button. 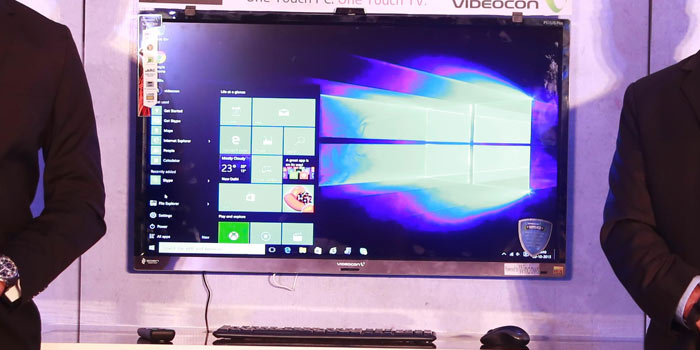 Two different sized models are being offered by Videocon, with one bearing an 81cm screen and the other, a 98cm one. The Windows 10 software is accompanied Microsoft Office, enabling swift creation of documents.

The makers of the television set have revealed that both models come with 1080p full HD resolution. HDMI ports are present onboard, apart from USB slots and 2GB worth of DDR3 RAM.

Videocon has blessed its newest offering with 16GB worth of internal storage that can of course be expanded further up to 128GB by means of its microSD card slot. This TV even ships with MHL support which enables you to connect your smartphones, tablets and other portable gadgets to it, while also charging them at the same time.

The new Videocon Windows 10 LED TV has been scheduled to go on sale all over India this November via the company’s stores and leading outlets like Vijay Sales. While its 81cm mode has been confirmed to cost Rs 39990, there’s no word on how much the 98cm variant will be made available at.