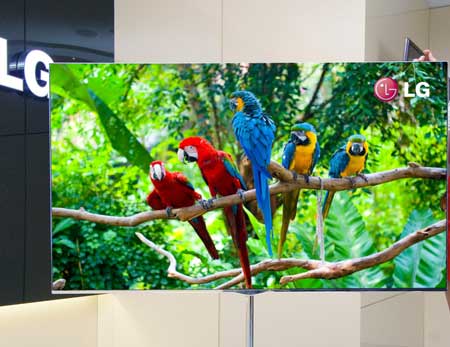 Before the official unveiling of the 55-inch LG OLED TV at the CES 2012, the company has given a peek into some interesting details of what it will be bringing to the show. As for entertainment buffs, there may be something new to look forward to as we now know that the OLED TV sports a mere 4mm thin slim profile, a narrow bezel and tips the scale at 7.5kg.

Arriving with the claim of being the world’s largest OLED TV, this one boasts of 4-Color Pixels and Color Refiner intelligence to introduce an enhanced viewing experience to users. The former spec is claimed to deliver true color depiction by employing just the four hues of red, green, blue and white as opposed to the other OLED TVs in the market which use the RGB setup. So viewers will should be able to witness sharp and consistent quality when it comes to the 55-inch LG OLED TV.

“Working closely with LG Display, we have a product which not only delivers on all the advantages of OLED over LCD but at a significantly lower cost than what could be achieved using existing OLED manufacturing technologies,” comments Havis Kwon, President and CEO of LG Electronics Home Entertainment. “OLED is clearly the future of home TV entertainment and LG is very focused on making this exciting technology as easy as possible for consumers to embrace.” 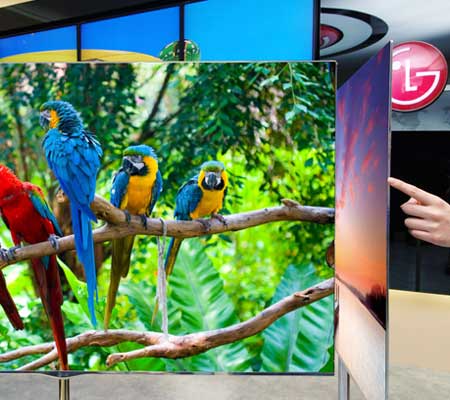 Rubbing together with the 4-Color Pixels technology is the Color Refiner which is responsible for providing consistency in colors even when content is being viewed from a wider angle. To do so, the feature employs an LG algorithm in order to fine-tune hues and tones. Besides claiming to offer an infinite contrast ratio, LG’s TV offering is said to proffer clear and sharp motion without any blurring for proper viewing.

As mentioned earlier, the 55-inch LG OLED TV will be making its first official appearance this month at the CES 2012.