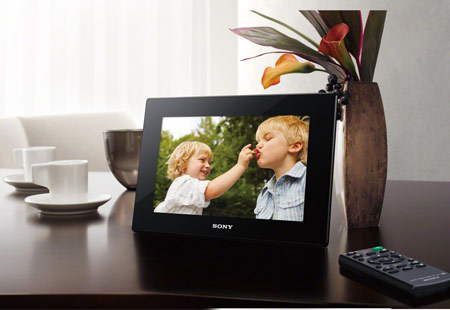 Equipped with a high resolution LED backlit LCD screen, capable of displaying detailed, realistic video with vivid colors and contrast, the series offers support to AVCHD and MP4 video formats. For compatibility with advanced HD cameras or camcorders like Sony’s Alpha, Bloggie, Cyber-shot and Handycam, the frames are powered by an advanced image processor to preview content in up to 192MP.

Additionally for an enhanced viewing experience, users can listen to background music whilst going through photos with the ability to play audio formats like MP3, AAC and Linear PCM. The series comes with internal support of up to forty songs and 2GB storage for thousands of images. Further on, for creating personalized slide shows, the S-Frame models bring various display and effects modes with options of Clock, Calendar, Time machine and Random.

For transferring images, the frames are equipped with a USB port. Also, in case of shortage on internal space, users can attach several types of media cards like SD, SDHC, SDXC Memory Card and Memory Stick PRO Duo.

The Sony HD Series S-Frame digital photo frames are expected to be available sometime this September on the SonyStyle website or at Sony retail stores and authorized dealers. The 7-inch WVGA LCD DPF-HD700 model is priced at $119.99 while, the 8-inch DPF-HD800 model comes with a price tag of $139.99. Also, users can purchase the 10-inch DPF-HD1000 model for $169.99.