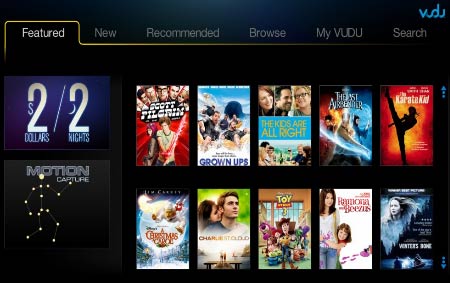 What with 3D streaming to PS3 and a recent Boxee Box debut, the folks at Vudu have been keeping themselves rather busy of late. And according to the latest post on the official Vudu blog, most enabled devices including TVs and Blu-Ray players has been given Vudu 2.0 which is optimized for HD quality content streaming.

UI improvements are part of the whole set up and encompass enhanced browsing and navigation as well as quicker access to movies. Patrons can also expect to see recommendations surfaced according to viewing history. Apart from being able to avail of new releases, users can look up Rotten Tomatoes reviews, linked filmographies of cast and crew and more.

The reworked UI will automatically be pushed onto compatible devices and requires no discs or downloads. Vudu is presently working at upgrading Vizio TVs as also Samsung gadgets to the 2.0 interface and the update is slated to be served up on these devices in the near future.