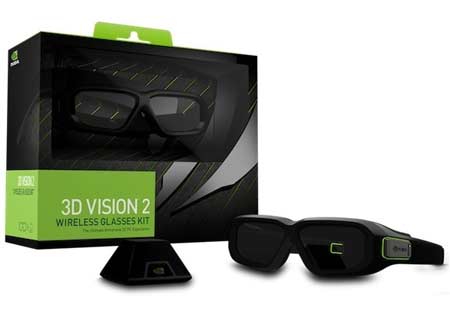 The new generation of Nvidia 3DVision 2 displays and glasses recently made an appearance at the GeForce LAN 6. However, there hasn’t been a confirmation on when these 3D displays and wireless glasses will be available for users.

These displays are said to sport a form factor more or less similar to the currently available 3D panels. The 3DVision 2 wireless glasses too do not appear very different from its predecessors. But it is claimed that the new technology is evident when the Vision 2 displays are viewed from under these newly engineered glasses.

As compared to the 3DVision hardware presently being used in most existing devices, the new technology manages to project a brighter image, says the company. And not only the display, users can also expect buttons on the keyboard that are easier to read for convenience while typing. Another advantage of these glasses is that they allow a relatively larger amount of light to reach the eyes.

These 3D glasses are designed to also facilitate wearing headphones while using them. Additionally, 3DVision 2 displays employ the Nvidia 3D LightBoost technology. This technology helps increasing the panel brightness, which in turn assists in cutting down on the dimming effect of 3D glasses. Moreover, LightBoost keeps the lenses of the 3D glasses open for a longer period of time for a brighter ambient lighting which simplifies reading the keyboard.

As these devices claim to possess advanced technology, they are naturally expected to offer an improved gaming experience. The Nvidia 3DVision 2 displays and glasses will most probably be launched by the end of this year.