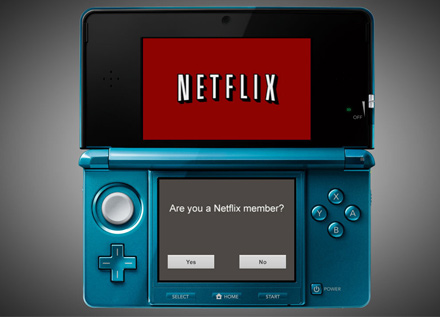 With the launch of the Netflix app along with many other games over the last few weeks for Nintendo’s 3DS, users of the handheld device would no longer be grumbling about the dearth of downloadable content for the device. This app was made available yesterday on eShop, the company’s online service for the 3DS. The Netflix app which is available for free allows Nintendo 3DS owners to stream unlimited TV content as well as movies on their handhelds.

The service boasts of more than 1.5 million community members who watch TV shows or movies using their Wii consoles. And now with the 3DS compatibility, the number is expected to grow even further. The content offered by this app varies from sitcoms, reality shows, documentaries to films. All this is displayed on the handheld’s upper screen in 2D. Movies in 3D which can be watched without wearing special glasses are soon expected to feature in its library.

“The new Netflix application looks great, plays great and is a fantastic consumer experience. It gives Nintendo 3DS owners access to an amazing wealth of movies and TV shows, which they can watch conveniently from thousands of free Wi-Fi access points across the country. Nintendo 3DS truly offers something for everyone,” explained, Nintendo of America President Reggie Fils-Aime.

In order to make the most of the Netflix app for Nintendo 3DS, users must purchase a streaming membership starting at $7.99 after which they can instantly watch video content on their Nintendo 3DS, the Wii and other devices. In order to function, all the app requires is a broadband internet connection. Parents concerned about the kind of content their kids watch on this device can use 3DS’ parental control system to administer access to the Netflix app.

Co-founder and CEO of Netflix, Reed Hastings, shared, “Nintendo is a terrific partner with Netflix. We’re excited to extend the partnership to include streaming on Nintendo 3DS.”

Users have to download a free system update in order to use the Netflix app on their Nintendo 3DS systems and enjoy unlimited TV shows and movies on it.