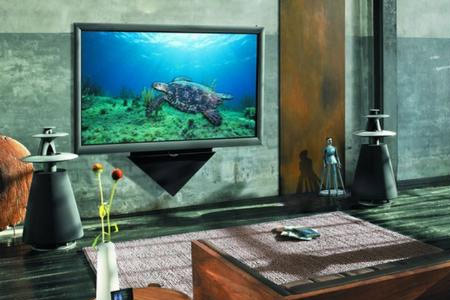 It’s a little difficult to dismiss those cool looking products that walk out of Bang & Olufsen quarters every now and then, despite their very heavy price tag and infrequent visits. And given that the 3D TV scenario is pretty crowded right now, Bang & Olufsen’s BeoVision 4-85, an 85-inch 3DTV sure impresses. The TV is said to deliver full HD picture in razor sharp details on a plasma screen. Colors are rich and the objects appear moving smoothly.

Bang & Olufsen has incorporated its Automatic Color Management technology for enhanced picture quality. Featuring a devoted center loudspeaker namely the BeoLab 10 that makes good use of the company’s patented Acoustic Lens technology, sound is scattered at a 180 degree angle. Complementing the improved picture quality, BeoLab 10 has the sound distributed equally and laterally from the center channel.

“BeoVision 4-85 is designed to give our customers the ultimate TV experience,” comments Dave Zapfel, Product Manager of Bang & Olufsen America, Inc. “It encompasses a wide selection of picture improvement technologies such as anti-reflection coating that reduces annoying reflections from the screen and automatic picture control which adjusts the light output of BeoVision 4-85 to adapt to varying room lighting conditions for optimum viewing day or night.”

This 85-inch entrant to the BeoVision 4 family comes complete with a distinct stand capable of elevating the screen with the mere touch of a button. Upon turning the TV on, the screen’s unique elevation for optimal viewing will expose the built-in BeoLab 10 loudspeaker. The Beo4 or Beo6 remote is what will allow users to move the screen as per their preference. When not in use, the screen wisely moves downwards in a sturdy manner so that it’s only a few inches above the floor.

The TV fits in the massive 85″ screen in a high-grade aluminum frame. Interestingly, movements of the speaker and screen gain and lose momentum so as to steer muscular progress. So much so that the initial lift of the screen is timed well with the boot time of the BeoSystem 3 picture and surround sound engine. While the Belab 10 steps ahead in position, the signature electronic curtains are drawn off. With the new TV, customization is further taken to new levels as users have the flexibility to add their preferences by the professional Bang & Olufsen showroom. In addition to this, the TV will hit shelves as a screen-only solution with a wall bracket mounting the screen for a lesser price.

For those who have the cash flowing and need something exclusive in the 3D TV terrain to splurge it on, the Bang & Olufsen BeoVision 4-85 TV is coming this June for a price of $85,000. It will be sold with the stand, remote control and BeoLab 10 loudspeaker. And that’s not all, a sister 3D TV, precisely a 103” version is also coming this summer. The pricing details for the latter aren’t revealed yet.