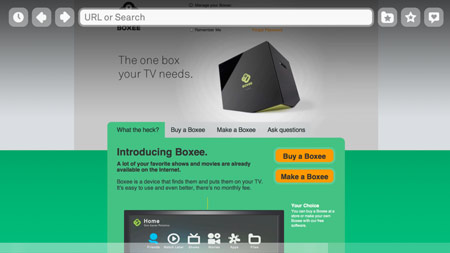 Before Google I/O takes over much of what’s left in thy planet, let’s not forget there were other interesting happenings in technoville too. For one, D-Link’s Boxee Box firmware has been updated to version 1.1 yesterday. The fifth update brings to the table a host of features that should up the ante for those glued to their TV sets.

Browser upgrades seem to be the highlight with the Favorites and History functions coming in as fresh additions. Support for HTML5 has also been enhanced, bringing additional content like HBOGO to the fore. Users can further look forward to a plethora of movie trailers now available on their TV.

The on screen display also sheds some flab. The web playback OSD has been cleaned to include a new on screen display. It accommodates a dewy seek bar that’s tailored for accurate rewinding/fast forwarding actions. The button count goes slimmer too, enabling users to view the background happenings effortlessly. The volume control has been taken off as well.

The customized artwork and descriptions for media files feature should catch the fancy of users who spend a chunk of their time making home movies. Just import the video into Boxee and throw in the desired artwork along with metadata to go with the NFO files. The niceties don’t seem to end at just that. There’s support for HFS formatted drives, the ability to filter out local files by source and seek option right in music playback.

What’s TV goodness without the latest trend of social sites in? The update integrates a handy counter to share content via Twitter, Facebook or Tumblr. The MLB.TV app gets a number of revisions as well. Users can view archived and live games with the free will of hopping to particular innings or game events. Rewinding and fast-forwarding games is simpler with the added perk of pop-up details on each pitch.

Boxee Box users can anticipate acquiring firmware update 1.1 over the next few days according to official Boxee blog.