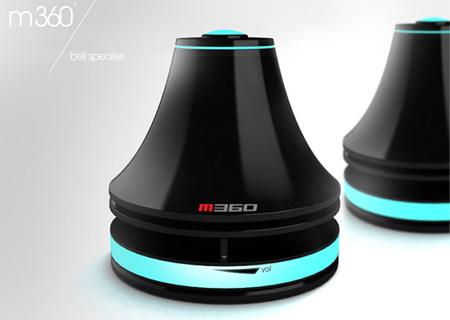 With Yanko Design always managing to put up a good show of innovation and creativity, their latest addition, the Bell Tweeter, seems to provide the same from the capability of transmitting sound in a full 360 degree radius. Designed by Samohvalov Sergey, the cone shaped speaker is said to deliver sound in every direction.

Currently, the speakers we utilize can transmit sound only in one direction or a particular angle through the location it’s facing, more or less due to its design. Additionally, those users in the path of the travelling sound will be able to appreciate it, unlike those who stand besides the speaker or behind it.

From the Bell Tweeter concept, the device will be capable of radiating sound from its cone in every direction. So how does it work? The speaker located on the upped-part of the cone can transmit the audio and further bounce it off the bottom, sending out sound waves in a complete 360 degree radius. Also, users can control the output through the volume dial by turning the cone in one direction to make it loud and the other to soften it.

The main advantage behind this speaker system is that unlike in traditional ones, the Bell Tweeter will be capable of evenly filling every room with sound. Furthermore, the conceptual speaker does appear to be much similar to the Altec Lansing VS4621 and the Razor Ferox systems.