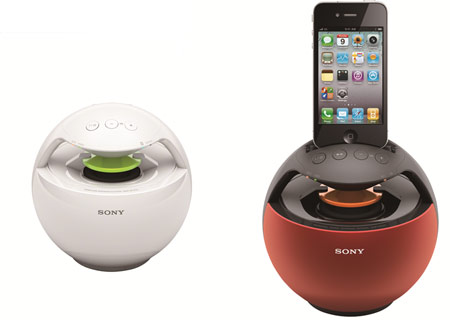 ‘Groundbreaking’ is how the Sony SRS-BTV25 dock with 3600 Circle Sound technology is being described by the company. Besides, its distinct visual appeal, the speaker offers Bluetooth music streaming and device charging. It has been tailored to meet the needs of smartphone, iPod and iPhone users. The company also reveals the RDP-V20iP speaker that seamlessly connects to the iPhone and iPod.

From a single, compact enclosure, the SRS-BTV25 speaker delivers balanced sound to every corner of the room courtesy of the Circle Sound audio diffusion technology. And the best part seems to be that the location of the speaker should be of least concern in this regard as audio belted out will still be of high quality.

Along with smartphones, the SRS-BTV25 is enabled to support a range of Bluetooth-enabled devices as well. Improved wireless technology only translates to the added convenience of no cable clutter. The condensed form factor also means it’s easily portable and occupies less space. Gamers too can make the most of omnidirectional audio minus any wires with this tiny speaker system.

The speaker boasts of a special bass-boost function, an audio-in port and the ability to charge any smartphone through the included USB charging port. As for the RDP-V20iP, it employs the same 3600 Circle Sound technology which functions as both a speaker dock and a charger for the iPhone and iPod. It can be controlled through the included remote.

The mobile device shows of an internal, rechargeable battery that’s juiced up for around 5 hours of playback. Packing in a punch, features to look out for in this system are the enhanced bass boosting and an attractive construct identical to the SRS-BTV25. While the SRS-BTV25 is supplied in black and white colors, the RDP-V20iP is thrown in a red color too along with options of black and white.

The pricing and availability details of the Sony SRS-BTV25 and RDP-V20iP are yet to be revealed.